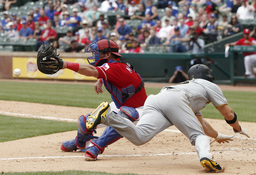 Polanco is enjoying the view.

Reynolds kept up his impressive start, hitting a three-run double as the Pirates completed a two-game sweep in Texas by topping the Rangers 7-5 on Wednesday.

A day after his first career home run put the Pirates ahead in the 11th inning of a 6-4 win that ended an eight-game losing streak, Reynolds extended his career-opening hitting streak to nine games with a liner over left fielder Joey Gallo's head in the fourth.

A 24-year-old outfielder acquired in the trade that sent Andrew McCutchen to San Francisco before the 2018 season, Reynolds joined Polanco as the only Pirates since 1900 with a hit in each of their first nine games in the big leagues. Polanco debuted with an 11-game streak in 2014.

"It's fun. It happened to me," said Polanco, who had an RBI double to help keep the Pirates in front. "It's humbling. It's just like playing the game. You don't think about nothing. You just play the game."

All four of Reynolds' RBIs in the majors came in the two games against the Rangers. He's hitting .414.

"That's every kid's dream, to play in the majors, and very few people get that opportunity," Reynolds said. "I'm lucky enough and blessed enough to have that opportunity, so I'm just trying to enjoy it."

The Rangers hit three homers, starting with the 11th of the season from Gallo on a 114 mph liner off the fencing of the foul pole in right. On Tuesday, Gallo set a club record with 10 home runs before May 1.

Danny Santana led off the seventh with his third, also off Pittsburgh starter Jameson Taillon. Shin-Soo Choo pulled the Rangers within 6-5 on a two-run shot against reliever Richard Rodriguez later in the inning. His fourth homer landed just beyond the wall in right over a leaping Melky Cabrera.

After an RBI single from Elias Diaz for a two-run lead, Kyle Crick pitched a perfect eighth and Felipe Vazquez made it 2 for 2 on saves in the series, getting his eighth in eight chances by striking out Choo and pinch-hitter Hunter Pence with the tying run at second in the ninth.

Shelby Miller gave up exactly four runs in a fifth straight start after cruising through the first three innings. Five of six hitters reached against the Texas right-hander in the fourth, capped by Reynolds' one-out double. Miller (1-2) allowed four hits and two walks in 3 1/3 innings.

STRUGGLING AND SUBBED OUT

Rougned Odor was 0 for 4 to drop to 2 for 24 since his return from a right knee sprain when manager Chris Woodward decided on a righty-lefty matchup by using Pence against the hard-throwing lefty Vazquez. The lefty-hitting Odor's average is down to .136.

"It hurts to have to do that because I feel like he's going to be one of our foundational players," Woodward said. "And he knows that. I had a good talk with him before the game. It's not that I've lost any trust in him."

Pirates: C Francisco Cervelli was out of the lineup a day after getting hit by a pitch on his left wrist. The club said there was no fracture, and it appeared unlikely he was headed for the injured list. ... RHP Chris Archer hasn't thrown since experiencing right thumb inflammation that put him on the IL on Monday, a day after his most recent start. The club anticipates him being ready when he's eligible to return.

Pirates: RHP Joe Musgrove (1-2, 2.06 ERA) is set for his seventh appearance and sixth start Friday at home against Oakland. He worked at least six innings in each of his first five starts.

Rangers: LHP Mike Minor (3-2, 2.88) is 3-1 with a 1.75 ERA is his past five starts and ranks fourth among AL pitchers with opponents hitting .179 against him. He is one of three big leaguers with four starts of at least seven innings each.