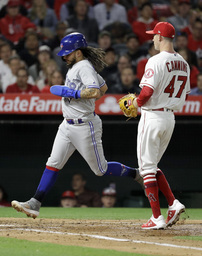 ANAHEIM, Calif. (AP) Griffin Canning and Vladimir Guerrero Jr. both made some of their earliest baseball memories up in the stands at Angel Stadium.

When the Angels right-hander and the Blue Jays slugger both stepped onto the Big A field as big leaguers for the first time Tuesday night, they created a few memories of their own before Brian Goodwin won it for the Halos.

Goodwin hit a tiebreaking homer in the eighth inning, and Canning struck out six while pitching into the fifth inning of his major league debut in Los Angeles' 4-3 victory over Toronto.

Canning got his first big league start in Guerrero's first road game in the majors, and both touted prospects got plenty of love from the Angels crowd. The fans were aware of the significance of the moment, both because of these youngsters' potential and their ties to Anaheim.

"It's pretty cool being the hometown kid," said Canning, an Orange County native. "I grew up watching the Angels, so to be in this clubhouse ... and that was actually my first time playing on this field. I thought I did a pretty good job keeping it simple and not making it bigger than it was."

Canning retired his first 10 batters and struck out five straight at one point during the most anticipated Angels pitching debut in several years. The former UCLA star is the most promising rotation prospect to emerge purely from Los Angeles' once-ravaged farm system in recent seasons, and he allowed four hits and a walk with clearly impressive stuff.

"That's probably one of the best debuts I've ever caught," said Jonathan Lucroy, marveling at his 22-year-old pitcher's 89-mph sliders. "The kid has got a bright future."

Guerrero went 0 for 2 with two walks while playing the first road game of his career in his Hall of Fame father's home ballpark.

Angel Stadium also gave several warm ovations to Guerrero, who spent his summers in Orange County during his father's six seasons with the Halos. While he didn't get a hit, Vladimir Jr. made a stellar defensive play at third base to rob Albert Pujols of a probable hit.

"I'm just excited for him, and excited for Vladdy (Sr.)," Angels star Mike Trout said. "I think he deserves to be here. He's a great young prospect. It's going to be exciting to see him this year."

Vladimir Jr. has fond memories of Angels games and Disneyland trips before he began the baseball career that led to his ballyhooed big league debut last week in Toronto.

Vlad Sr. didn't attend this game in Anaheim, saying he wanted the spotlight solely on his son.

Canning had a suite full of friends and family, along with his high school's baseball team and untold dozens of friends in the stands.

Vlad Jr. struck out and grounded out to shortstop in his two at-bats against Canning, who didn't allow a baserunner until Freddy Galvis' one-out single in the fourth.

"The kid was good first couple of innings," Toronto manager Charlie Montoyo said of Canning. "He had a good cutter. It was moving pretty good. He was expanding the zone."

Guerrero drew a leadoff walk in the ninth inning, but Hansel Robles got three quick outs for his second save.

Ty Buttrey (2-1) pitched the eighth during the Angels' 4 2/3 innings of scoreless, one-hit relief.

Brandon Drury hit his third homer in four games for the Blue Jays, who had won three straight and nine of 12.

The Blue Jays had retired 11 straight Angels before Goodwin connected off Ryan Tepera (0-1) for the fourth homer of his strong start with Los Angeles.

Lucroy hit a two-run homer off Clay Buchholz for the Angels, who have won four of five after struggling through the previous two weeks.

"I tried to go in, and he pulled it," Buchholz said of Lucroy's homer. "The guys got us back into the game."

Trout went 0 for 3 but drew a walk in the third inning to reach in his 27th consecutive game to start the season, matching Darin Erstad's franchise record from 2000. The two-time AL MVP also made a baserunning error that ended the third inning when he kept going from second to third after Justin Bour had stopped.

Blue Jays: Eric Sogard left in the fifth inning due to illness. ... Longtime Angels right-hander Matt Shoemaker had left knee surgery Tuesday. He is out for the season. ... Pitchers Clayton Richard and David Phelps threw bullpen sessions over the past two days in their return from injury.

Angels: Shohei Ohtani won't travel on the team's trip to Monterrey, Mexico, this weekend. The AL Rookie of the Year is taking regular batting practice and facing live pitching, but his return to the Angels' lineup won't happen until next week on the road at the earliest. ... Left-hander Andrew Heaney threw his third bullpen session and remained on track to return to the rotation in May after developing elbow inflammation in spring training.

Toronto's Marcus Stroman (1-3, 1.43 ERA) attempts to add another win to his AL-best ERA in the middle game of the series. He faces Los Angeles' Felix Pena (0-1, 3.63), who pitched five solid innings against the Yankees last week.