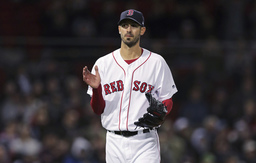 BOSTON (AP) Rick Porcello delivered the kind of start the Boston Red Sox needed and their fans have been waiting to see.

It was the deepest outing of the season for any Boston starter and by far the most effective for Porcello, who has won two straight starts after going winless in his first three.

"I haven't pitched the way I've wanted to up to this point so it was nice to get that one rolling," Porcello said. We're doing whatever we can to get it on track and it's starting come around. I think everybody's throwing the ball a lot better."

Porcello (2-3) allowed only two hits and walked two. He also became the first starter to go past the seventh inning for the World Series champion Red Sox in a rough opening month of the season.

Boston's starters have been slowly getting back on track lately, taking some stress off relievers who were called upon often in the first few weeks for the struggling Red Sox.

"I've got confidence in all of them," manager Alex Cora said. "It was just a bad start for everybody. They just struggled early. Now they're finding a rhythm and we'll see where it takes us."

Tyler Thornburg pitched the ninth and lost the shutout when Robbie Grossman hit a leadoff homer.

Mookie Betts and Mitch Moreland homered for Boston and the Red Sox won for the fourth time in six games.

"We know we've got some work ahead of us. We're going in the right direction right now. We've just got to kind of keep our heads down and keep moving forward," Moreland said. "It's pretty much the same group that we won it with last year. The talent is there. It's just getting on that roll and playing like we know how."

Aaron Brooks (2-3) pitched 4 1-3 innings for Oakland, allowing five runs on six hits and three walks. The A's didn't have a runner past second base until Grossman's third homer of the season spoiled the shutout bid.

Oakland's only hits were Ramon Laureano's leadoff single in the third and a two-out double by Nick Hundley in the fifth.

"A little funk going on right now, across the board. We haven't played great defense. We haven't pitched very well. We haven't swung the bats very well," manager Bob Melvin said. "But we'll come out of it. It's just a part of the season that's difficult. We've got to remain positive and these guys will."

Betts put Boston up 1-0 with a homer in the first, his sixth of the season. Sandy Leon added an RBI single in the second and Moreland added a two-run homer in the fourth to make it 4-0.

Moreland's team-high eighth homer, a deep shot to straightaway center field, lifted him out of an 0-for-15 skid.

"It feels good," Moreland said. "They can't shift that one, so it's nice to get one in there and get it out."

Brooks, who pitched six scoreless innings and struck out six against the Red Sox on April 1 in Oakland, had just two strikeouts this time. He left the game after Rafael Devers doubled in J.D. Martinez, who reached on an error by Laureano in center field to put Boston up 5-0.

"Definitely a few pitches caught a little more of the zone than I was anticipating," Brooks said. "With that lineup, as soon as they start getting a couple of hits going, they're as good as anybody."

Betts scored his 500th career run when he touched the plate on his home run. The only other Red Sox players to score 500 runs within their first 700 games were Nomar Garciaparra, Johnny Pesky and Ted Williams.

"He's been in the cage working hard. He's staying in the zone and putting good swings on it," Cora said. "Regardless if he's hitting .380 or .180, he's going to put in the work and you can see the results."

Red Sox: Utility player Brock Holt has been shut down after aggravating a sore shoulder during a rehab assignment with Triple-A Pawtucket. Holt has been on the injured list with a scratched cornea since April 6. . Cora said SS Xander Bogaerts will get the day off Wednesday.