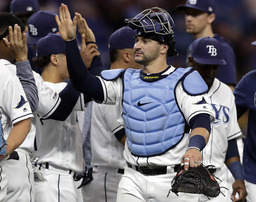 Jalen Beeks took over from opener Ryne Stanek in the second inning and struck out seven in 4 2/3 shutout innings, Mike Zunino homered for the second straight game and the Rays beat Kansas City 5-2 Tuesday night, sending the Royals to their fifth straight loss.

Homer Bailey (2-2) failed in his attempt to win three straight starts for the first time in five years, getting taken out after Tampa Bay's first four batters reached in the second inning.

Zunino had three of Tampa Bay's seven hits and drove in two runs.

AL East-leading Tampa Bay clinched its seventh series win in eight series and extended its winning streak against the Royals to 10 games. Kansas City is an AL-worst 7-17.

"I was trying to lengthen out and see how far I can go and help the bullpen because we've been taxed a little bit lately," he said.

Emilio Pagan struck out two in a perfect ninth for his second save in two nights, the first two saves of his major league career. Rays manager Kevin Cash avoided using Jose Alvarado and Diego Castillo, his regular late-inning relievers.

"To be be able to give Alvarado and Diego two days of rest - those guys have earned it and they needed it," Pagan said. "I'm glad I could get the job done to kind of reset the back end of our bullpen."

Bailey gave up four runs, three hits and four walks in one inning-plus, his ERA rising to 5.63. He opened both of his innings with walks.

"That was a pretty good indicator right there," he said. "From the beginning, I just wasn't very sharp."

Bailey, who went 1-14 last year, was coming off his first consecutive winning starts since July 2017.

Joey Wendle hit a two-run single in the first, ending an 0-for-16 start.

Zunino had an RBI single in the second, when Jake Newberry entered with the bases loaded and allowed Brandon Lowe's run-scoring single and Yandy Diaz's sacrifice fly that boosted the Rays' lead to 4-0. Zunino homered off Tim Hill in the sixth.

Martin Maldonado hit his first homer for the Royals, a seventh-inning drive off Austin Pruitt, who threw a run-scoring wild pitch in the eighth.

Royals: 3B Hunter Dozier did not play, a day after leaving a game due to back spasms. ... LHP Brian Flynn (sprained left elbow) is to start an injury rehabilitation assignment Wednesday at Triple-A Omaha.

Rays: 1B Ji-Man Choi was placed on the restricted list because of a personal matter.

LHP Blake Snell (2-1) will make his first start in 10 days for the Rays in the finale of a nine-game homestand. The reigning AL Cy Young Award winner missed a start after fracturing his right fourth toe attempting to move a decorative display in a bathroom on April 14. RHP Jakob Junis (1-2) starts the finale of the Royals' 10-game trip.