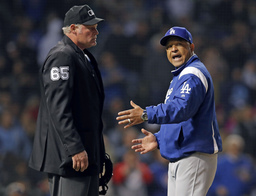 CHICAGO (AP) Jose Quintana was the star of the show. Even better than Javier Baez's dance around David Freese.

"He was once again on top of his game," manager Joe Maddon said. "Great focus, kept coming back with good pitches."

Willson Contreras hit a three-run double in Chicago's four-run first, and Anthony Rizzo added a two-run drive in the second. Baez reached three times, including a memorable infield single in the second and a solo shot in the seventh.

It was more than enough support for Quintana (3-1), who turned in another gem in the Cubs' sixth win in seven games. The veteran left-hander allowed two runs and four hits while improving to 3-0 with a sparkling 0.86 ERA since he was hit hard in a loss at Milwaukee on April 5.

NL West-leading Los Angeles had won seven of eight. But the Dodgers were unable to recover after Kenta Maeda (3-2) struggled early on.

With one out and runners on second and third in the first, Baez walked on a close full-count pitch that Maeda wanted badly. After Kyle Schwarber struck out swinging, Contreras doubled down the third-base line and Daniel Descalso tacked on an RBI double for a 4-0 lead.

"The Baez walk, that was something I did not like at all," Maeda said through a translator. "It ended up making the damage a little bigger."

Rizzo went deep with one out in the second, sending an opposite-field drive into the bleachers in left. Baez then hit a bouncer up the line and juked inside to avoid Freese's tag , delighting the crowd of 35,536 on a cool night at Wrigley Field.

"Never had this play before," Baez said. "It's just things that come to me, reaction, I don't know."

The Dodgers wasted a couple of late chances to get back in the game. Pinch-hitter Max Muncy struck out looking on Quintana's 114th pitch, stranding two runners in the seventh. A.J. Pollock struck out and Cody Bellinger grounded out with the bases loaded in the eighth.

"We had chance to scratch our way back into the game, but we didn't get that big hit," Roberts said.

Maeda allowed seven hits, struck out five and walked three in four innings. The six runs were the most allowed by the right-hander since he was charged with a career-high seven in an 8-1 loss at Arizona on Aug. 31, 2017.

"He just didn't have his fastball command," Roberts said.

Cubs shortstop Addison Russell is joining Triple-A Iowa to prepare for his return from a 40-game suspension for violating Major League Baseball's domestic violence policy. Russell is expected to play when Iowa begins a nine-game homestand Wednesday night against Nashville.

Dodgers: LHP Rich Hill (strained left knee) pitched six innings during an extended spring training game in Arizona on Monday. He is expected to make his season debut Sunday against Pittsburgh. ... C Russell Martin (back) could return this weekend. "We're going to do a simulated situation on Friday," Roberts said. "Depending on how that goes, a weekend activation seems likely."

Cubs: LHP Jon Lester (left hamstring strain) is "trending in the right direction" when it comes to pitching Thursday against Los Angeles, Maddon said. ... LHP Mike Montgomery (mild left lat strain) felt fine after pitching four innings of three-run ball in a rehab start for Double-A Tennessee on Monday. "We're going to set him up again to do the same thing, but he came through the thing well," Maddon said. ... LHP Xavier Cedeno (wrist inflammation) got two outs in his third rehab appearance with Tennessee on Tuesday night.