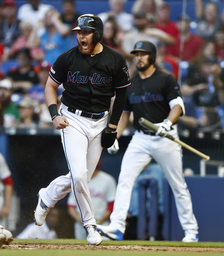 MIAMI (AP) Newcomer Austin Dean led the Miami Marlins' breakout at the plate Saturday, and he's optimistic about a turnaround in the won-loss column, too.

Dean had four hits and five RBIs, both career highs, to help Miami end a five-game losing streak by beating the Philadelphia Phillies 10-3.

The performance came in the outfielder's second game since being recalled from Triple-A to make his season debut with the Marlins.

"Before I got here, we were struggling a little bit, but I know that's not us," Dean said. "I know we're going to be a really good team this year."

The Marlins, who won for only the fourth time, snapped an offensive slump with a season-high 18 hits after being outscored 30-2 in their previous four games.

Dean hit his first homer of the season and also drove in two runs with a double to complete a 4-for-4 night. He played in 34 games as a rookie with the Marlins last season and hit four home runs, and was their minor league player of the league, but didn't make their roster out of spring training.

"I'm just going to show up and play the game hard and compete and win," Dean said. "I love winning. I've always been on a winning team."

Miami was one against Zach Eflin, who gave up three homers in the third inning, including back-to-back shots by Brian Anderson and Neil Walker . Anderson had three hits and has gone 6 for 10 in the past three games, hiking his average from .143 to .231.

"All of a sudden, we get a little bit of a breakout game," manager Don Mattingly said. "Hopefully it's something that turns the corner and gets us going. It was needed - to see some balls fall, to put some runs on the board, to know that you can do it."

Caleb Smith (1-0) needed 29 pitches to get through the first, but settled in to pitch six scoreless innings. The only hit he allowed was a double by Andrew McCutchen in the third.

"They beat us from every element of the game - defense, pitching and they swung the bats better than we did," Phillies manager Gabe Kapler said. "We have to play better than this."

Anderson hit his first home run of the year on Eflin's first pitch in the third inning. Three pitches later, Walker hit his third homer. And with two outs, Dean homered to make the score 6-0.

"For the most part, honestly, I thought I had really good stuff," Eflin said. "It's one of those weird games where things that normally don't get hit get hit."

Miami posted a crooked number for the first time in 45 innings by scoring twice in the second. Rojas doubled, Dean hit an RBI single and Brinson doubled home another run.

The Marlins totaled only 35 runs in their first 14 games.

The Phillies had two on with two outs in the first when Smith waged an 11-pitch showdown with J.T. Realmuto that included seven foul balls.

"I was just thinking, `I wish he'd swing and miss,'" Smith said.

Realmuto finally did for strike three , and Smith escaped.

"We had him on the ropes there," Kapler said. "We were really close to putting their backs against the wall. He just settled in and got into a rhythm, a groove."

The crowd of 13,828 was the first in five figures at Marlins Park since opening day. Miami ranks last in the majors in attendance.

RHP Jose Urena (0-3, 9.22), the Marlins' opening day pitcher, tries to bounce back from a poor start this year against RHP Vince Velasquez (0-0, 3.00) in the rubber game of the series Sunday.