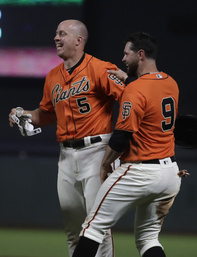 SAN FRANCISCO (AP) Erik Kratz wasn't tired after catching 18 innings. The 38-year-old San Francisco Giants backup had done it once before in his career, in 2016 with the Pittsburgh Pirates.

San Francisco's bullpen was just as sturdy on a night when manager Bruce Bochy used every reliever.

Brandon Belt doubled to lead off the 18th and scored on Kratz's one-out, fielder's choice grounder, as the Giants beat the Colorado Rockies 3-2 in a game that ended Saturday morning.

"You don't prepare to play 18 innings, but it's just like anything else, you take it one pitch at a time," Kratz said. "I got a second wind in the 17th inning. You get energy from seeing your pitchers come out and throw longer than they're used to, execute pitches."

After Belt doubled and two batters were intentionally walked to load the bases, the Rockies went to a five-man infield, bringing in center fielder Ian Desmond. Kratz hit a slow grounder to Desmond, who had to run to his left and made a diving stop before throwing home. Belt slid in safely, but Rockies manager Bud Black immediately asked for a replay.

A brief replay confirmed the call that catcher Chris Iannetta's foot was off the plate, giving the Giants back-to-back wins for the first time this season.

While Kratz got the accolades for driving in the winning run, it was San Francisco's bullpen that made the difference. Eight relievers combined for 14 scoreless innings after the Rockies scored twice in the fourth.

"What a job that bullpen did, all of them," Bochy said. "Just a really gutty effort."

A postgame fireworks show began shortly after the game finished.

"That's pretty special right there," Bergen said. "Everybody comes in and does more than what they're usually asked. Almost every guy was extended. We were just trying to get us back in the dugout to give us a chance to score a run, and we did at the end."

DJ Johnson (0-1) took the loss for Colorado. The Rockies (3-11) have lost seven straight and are off to the worst start in franchise history.

The teams combined for 41 strikeouts - 24 by the Rockies. The Giants ran out of giant "K" markers that are hung along the brick wall near right field signifying strikeouts, so three fans stood and posed like K's after the 21st strikeout by Colorado.

"We fought hard all night, so did they," Rockies manager Bud Black said. "Our strikeouts were a little high but overall I thought we were on the attack. We had some opportunities we didn't cash in."

The Giants and Rockies are the only teams that have not scored in the first inning this season.

Giants starter Drew Pomeranz had an uneven outing against his former team, allowing two runs and four hits in five innings. That was significantly better than his previous two starts. Colorado's Chad Bettis pitched into the sixth inning and allowed two runs on six hits.

San Francisco's Pablo Sandoval has settled in nicely in his role coming off the bench this season. He is 5-for-12 with four doubles as a pinch-hitter after getting eight pinch-hits in all of 2018.

Rockies: 2B Daniel Murphy will avoid surgery and has been fitted for a new splint on his fractured left index finger after meeting with a hand specialist in Arizona. The three-time All-Star underwent a second series of tests, and the plan is to let Murphy's finger heal on its own. Murphy signed a $24 million, two-year deal with Colorado in the offseason. . Antonio Senzatela (right heel blister infection) has rejoined the team, but no determination has been made what the next move is for the right-hander. Senzatela allowed two earned runs over seven innings in two rehab starts for Triple-Albuquerque.

Madison Bumgarner (0-2, 3.32 ERA) pitches on Saturday for San Francisco, while Colorado sends Kyle Freeland (1-2, 5.40) to the mound in a matchup of left-handers. Bumgarner is winless in three starters, and the Giants have lost seven of the previous eight games that the 2014 World Series MVP has pitched in, dating to last season. Freeland is making his third road start this season.