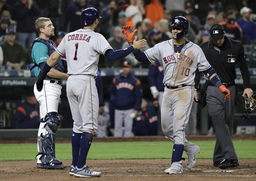 SEATTLE (AP) Jose Altuve is as baffled as everyone else about his recent power surge.

Altuve doesn't know what's different, and he's even been self-scouting, studying video of his suddenly mammoth swing. He sees no difference between this week and last.

"You want to know what you're doing good because when you start not hitting the ball very good you want to come right back to that," Altuve said. "But I feel like I'm doing the same thing. I would say I'm getting good pitches to hit."

And lots of them.

Altuve's grand slam in the sixth inning extended a career-best streak of consecutive games with a home run to four. He had four homers in the Astros' previous three-game series sweep of the Yankees and now has six on the season.

"He's a special player and I think he's got a chance to win MVP again," Gurriel said.

Gurriel, filling in for the injured Alex Bergman, hit his slam in the eighth inning to secure the game against the pesky Mariners, who lost the game but continued their major league record of 16 straight games with a home run to start the season when Tom Murphy hit a solo home run in the ninth.

George Springer also homered for the Astros, a two-run shot that cut Seattle's early 3-0 lead to 3-2.

"We have so many good players, starting with Springer," Altuve said. "He hit the two-run homer to get some momentum. Then we kept swinging, kept getting on base, and it seems like even with two outs the inning is not over for us and we keep scoring runs."

The combination of starter Wade Miley, a former Mariners pitcher, and Brad Peacock (2-0) helped Houston hold down Seattle's muscular lineup, which came into the series with its AL West rival with 36 home runs and 117 runs scored.

The Mariners, who entered the game with a six-game winning streak, appeared to be up to the tricks that helped them to the major league's best record three weeks into the season, jumping on Miley early. They forced him to throw 41 pitches in the first inning, taking a 1-0 lead on Tim Beckham's RBI single. Domingo Santana's two-RBI single extended the lead to 3-0 in the second.

From there, though, Miley tightened things up through the fourth inning, when he was pulled for Peacock. The right-hander began the season as a starter, taking two turns through the rotation before being moved to the bullpen during a stretch in which manager AJ Hinch plans to use four starters due to a fortuitous run of days off.

Miley and Peacock combined to pitch 7 1/3 innings, giving up seven hits with nine strikeouts and two walks. They held the Mariners hitless for four innings, a stretch of 14 batters with just one baserunner, who reached on a walk. Roberto Osuna earned the save.

Seattle starter Wade LeBlanc threw two bad pitches, giving up a double to Josh Reddick, then a two-run homer to George Springer in the third inning, cutting the lead to 3-2. He steadied himself but injured his right oblique while throwing a pitch in the fifth inning and was replaced with two runners on base.

Mariners reliever Shawn Armstrong (0-1) got out of the jam in the fifth in his first appearance of the season following an injury rehab assignment, stranding both runners. He gave up two weak singles to start the sixth, struck out a batter, then watched as Springer's sharply hit liner bounced out of leaping second baseman Dee Gordon's glove to load the bases.

Altuve then hit his sixth home run of the season deep to left field. It was the second grand slam of the second baseman's career.

"Unfortunately, out of the whole outing, I think that (Altuve's grand slam) was the only bad pitch that I threw, and I threw it to the wrong hitter," Armstrong said. "He's really good up there. He's really aggressive, and when you leave a ball middle-middle like that he's going to make good contact on it in that situation.

Bregman was able to sprint full speed in workouts before the game, Hinch said, but remained out of the lineup with the sore hamstring he injured Tuesday night against the New York Yankees. Hinch hopes Bregman will return to the lineup during the three-game trip to Seattle. Bregman said there's a very good chance he'll play Saturday. . Seattle manager Scott Servais said LeBlanc will have an MRI and is likely to miss at least his next start with the injury.

Astros: RHP Justin Verlander (1-0, 4.24) has a 12-9 career record against the Mariners, but was beat up in his last appearance against Seattle, giving up six runs and seven hits in two innings last August in Houston.

Mariners: RHP Felix Hernandez (1-0, 4.26) returns to the mound after being pulled following one inning Monday at the Kansas City Royals. Hernandez came out of the game with virus-like symptoms after giving up two runs on three hits.