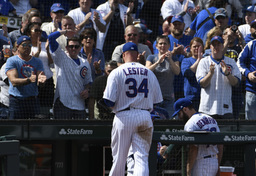 Chicago's beleaguered bullpen stepped up after Jon Lester departed with left hamstring tightness, leading the Cubs over the Pittsburgh Pirates 10-0 in their home opener on Monday.

"That will build their confidence. They need that," manager Joe Maddon said. "The group needs that. They were all really good."

Chicago's bullpen had an 8.37 ERA on an opening 2-7 trip, amplifying concerns about pitching depth with relievers Brandon Morrow, Xavier Cedeno and Tony Barnette sidelined by injuries. But the bullpen threw four scoreless innings Sunday at Milwaukee, and the form carried over into the matchup with the Pirates.

Brach (1-0) came in after Lester was removed with two on and no outs in the third. He got Starling Marte to bounce into a double play, then struck out Francisco Cervelli.

Brach worked the fourth, and Kintzler and Rosario each pitched two innings. Strop closed it out on a picturesque day at Wrigley Field.

Lester got hurt when he scored from second on Ben Zobrist's two-run single in Chicago's six-run second. The veteran left-hander is scheduled for an MRI on Tuesday.

"I didn't feel a pop or any tingling or any numbness or anything like that," Lester said. "Just kind of felt like something was in there grabbing me a little bit. So I guess that's the positive look at it. Like I said, tomorrow will tell us more."

Pittsburgh had won four in a row, but the Pirates made four errors, including three by shortstop Kevin Newman in the second.

"We need to play better defense," manager Clint Hurdle said. "There were a couple of different sequences there, maybe, with execution of pitches didn't help and defensively we had outs to put away and we didn't do it, and the inning got away from us."

In between the fielding trouble for Newman, Lester, Zobrist, Rizzo and Javier Baez each came up with big hits. Rizzo's run-scoring single went off Taillon's head, but he stayed in the game.

"I'm fine. I'm unlucky I got hit and lucky I seem to be OK coming out of it," said Taillon, who was charged with six unearned runs and four hits in two innings.

Newman said it was a humbling experience.

"A couple of days ago was the greatest day I've ever had on the field. Today was quite the opposite," he said.

Kyle Schwarber added a two-run homer in the fourth as the Cubs earned their largest shutout victory in a home opener in franchise history. Their 72 runs is their highest total through 10 games since they scored 76 times in the first 10 games in 1954.

Baez picked up an RBI single in the second when he threw his bat at a ball that bounced in the dirt , leading to a liner that just got over Newman's head. Baez shrugged as he stood on first base.

"I saw Vladimir Guerrero did it back in the day and he's in the Hall of Fame right now, so ... " a grinning Baez said. "Just a joke, just a joke."

Taillon had allowed just five unearned runs in 441 2/3 innings coming into the day.

Cubs: Morrow (elbow surgery) has completed each of his bullpen sessions so far "without incident," according to president of baseball operations Theo Epstein. The next step for Morrow is expected to be finalized this week. ... Barnette (right shoulder inflammation) and Cedeno (left wrist inflammation) are "moving along and getting closer to the possibility of rehab assignments," Epstein said. "No setbacks with either guy."

Following an off day, right-handers Jordan Lyles and Yu Darvish get the ball when the series resumes Wednesday night. Lyles (0-0, 0.00 ERA) made his Pittsburgh debut Thursday against Cincinnati and pitched five innings in the Pirates' 2-0 victory. Darvish (0-1, 8.10 ERA) struggled in his first two starts of the year, issuing 11 walks in just 6 2/3 innings.

Jay Cohen can be reached at http://www.twitter.com/jcohenap