Minor victory for Rangers in 4-0 win over frustrated Astros 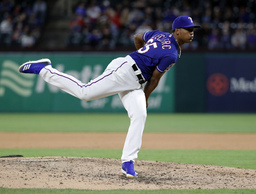 ARLINGTON, Texas (AP) Gerrit Cole had been frustrated most of the game, like the rest of the Astros, and Houston's starter went immediately to the home plate umpire after recording his final out.

Cole put his glove over his mouth and was clearly agitated during an extended conversation with ump Ron Kulpa at the end of the sixth inning of the Astros' 4-0 loss Wednesday night against the Texas Rangers.

That was long after Astros manager AJ Hinch and hitting coach Alex Cintron had been ejected by Kulpa in the second inning for arguing balls and strikes.

"It was a challenging night for us. Just looking to shower it off," said Cole (0-2), who struck out nine and allowed three runs. "Maybe disagreed on a call or two, but that wasn't the major point of issue for me. What he does is out of my control and I need to do a better job of handling my body language. ... I'm just going to leave it on the field. It wasn't with the strike zone."

Umpire crew chief Jerry Meals, who was working third base, said Cole was upset leaving the game because Kulpa had limited him on his warmup pitches in the fourth inning after the pitcher was late coming out of the dugout then. Meals said Kulpa was enforcing MLB pace-of-play policy when he stepped in front of the plate.

"We've been instructed to tell him one more pitch, he ignored that. Threw another one, fine. Ignored it again, wanted to keep throwing," Meals said. "He has a responsibility to come out of the dugout earlier to warm up. He waited until his catcher was ready, which is not what you do."

As for the ejections, Meals said the Astros dugout "basically erupted" after a called strike on the first pitch thrown to Tyler White in the second.

Hinch then came out after Kulpa stared toward the dugout. Nobody was initially ejected, but soon after the manager returned to the dugout and before the next pitch, Cintron was still chirping and was tossed.

When Hinch was asked if he was upset that Kulpa kept looking toward the dugout, the manager responded, "Yeah, I think things could have been handled differently. Everybody has social media. Everybody has a broadcast. So everybody knows what happened."

One pitch later, after another called strike, Hinch was ejected and then came out of the dugout for a heated argument with Kulpa. Hinch was pulled away by bench coach Joe Espada, who took over as the acting manager.

"So we know you argue balls and strikes is one thing. When you get ejected more aggressively, it's disappointing," Hinch said.

On replay, Kulpa appeared to be saying "I can do whatever I want" while addressing Hinch.

"That's what he said, and that's apparently what he meant," Hinch said. "He's in charge. And obviously you make a scene I guess so everybody has to pay attention. But we'll let the league sort it out."

Meals said Kulpa had warned the Astros bench to "knock it off" and told Hinch that when he came out the first time.

"It was all because of the dugout complaining on pitches," Meals said of the ejections.

Mike Minor (1-1) pitched seven sharp innings for the Rangers, who are 4-2 after winning each of their first two series for new manager Chris Woodward. It is the first time since 2013 that Texas has won its first two series of a season.

Minor, who didn't make it out of the fifth inning in his first career opening-day start last Thursday, gave up five hits, struck out seven and walked two.

"I think I was honestly just glad to get that out of the way," Minor said, referring to his first start. "And now every game counts and everybody just kind of leaning on each other. It's not going to match up like that the whole season, so everybody's just kind of going out there competing."

After fielding Hunter Pence's comebacker and throwing to first for an inning-ending out on his 105th pitch in the sixth, Cole went directly to Kulpa. While the Astros batted in the seventh, Cole was still rankled while pacing back and forth in the dugout.

Cole also addressed Kulpa after the third inning, during a stretch when the pitcher had just retired seven batters in a row since Gallo's walk in the first.

The loss ended a season-opening 2-5 trip for the two-time defending AL West champions who won the World Series in 2017.

Shawn Kelley and Jose Leclerc each pitched an inning to wrap up the first shutout of the season for the Rangers.

Rangers: Mazara fell awkwardly to the ground after colliding with 1B Yuli Gurriel on his hit in the first. Mazara stayed down for several minutes while a Rangers trainer checked him, before he got up and jogged around a bit.

Rangers: RHP Edinson Volquez makes his second start on Thursday night when the Rangers travel to Los Angeles to serve as the opponent in the home opener for the Angels.