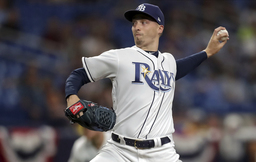 ST. PETERSBURG, Fla. (AP) Blake Snell's arm was on. Chris Iannetta's foot was a little off.

That was more than enough for the Tampa Bay Rays on Tuesday night in a 4-0 win over the Colorado Rockies.

Snell matched a career high with 13 strikeouts, pitching seven innings of two-hit ball to lift the Rays to their fifth straight win. The AL Cy Young Award winner struck out six straight during one stretch, helping Tampa Bay improve to a franchise-best 5-1. Snell (1-1) rebounded splendidly after allowing five runs in an opening day loss to Houston.

"It got to the point in the sixth inning where everything was working so well, we were just kind of laughing at each other," Snell said. "Everything was really good today."

With the bases loaded and one out, Mike Zunino hit a chopper to third baseman Nolan Arenado, who threw to the plate for a forceout. A replay review showed Iannetta lifted his foot off the plate before catching the ball, allowing Yandy Diaz to score. Guillermo Heredia followed with a two-run single.

"It's one of those things where you know the way (Snell) was dealing, that it may only take one," Zunino said. "But it was nice to pad that lead against a team like Colorado."

Even in the first inning, three runs looked like a lot for the Rockies to overcome.

"Us getting the lead early was huge," Snell said. "It allowed me to settle in pretty quick, and it's always easier to pitch with a lead."

Asked if it might have might have been a different game if Iannetta had kept the back of his foot on the plate another fraction of a second, Rockies manager Bud Black said: "Revisionist history. The whole world changes on every pitch or every play that's made. That's one you don't see really, right? The catcher not keeping his heel down. That's unfortunate. "

Christian Arroyo's two-out single off reliever Carlos Estevez made it 4-0 in the sixth.

Freeland lost for the first time in 12 starts since last Aug. 1. He tied his career high with 10 strikeouts in 4 2/3 innings. He gave up three hits and four walks.

Trevor Story had singles in the fifth and seventh innings for Colorado's only hits. The Rockies have lost four straight and scored only one run in their last 30 innings. They never got a runner as far as second base against Snell and reliever Wilmer Font, who closed with two hitless innings.

ONE RUN OR LESS

The Rays have given up no more than one run each of their last four games, two games each against Houston and Colorado. It is the second time in franchise history they went four straight games without giving up two runs. They did it in September 2000 against Toronto (two games) and the New York Yankees.

Rockies: 1B Daniel Murphy (fractured left index finger) probably will be sidelined for at least a month. He was added to the 10-day injured list Monday. LHP Jake McGee (sprained left knee) joined him on the 10-day IL on Tuesday.

Rays: INF Daniel Robertson left the game in the second inning with a stomach illness. ... Diaz came up limping running out a double in the eighth and left the game with an ankle injury.

RHP German Marquez, a former Rays prospect who was traded in January of 2016, will pitch the series finale for the Rockies on Wednesday against RHP Charlie Morton.