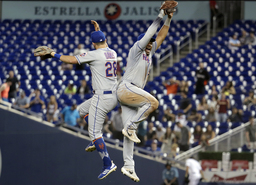 MIAMI (AP) Mets reliever Justin Wilson stood at his locker 30 minutes after Tuesday's game fanning himself with his shirt.

No wonder. Wilson escaped jams in the eighth and ninth innings to earn his first save since 2017, and New York held on to beat the Miami Marlins 6-5.

Wilson wasn't the only Met to sweat. The Marlins went 1 for 10 against Jason Vargas (1-0), who was hit hard but allowed only two runs in five innings in his season debut. Miami totaled 16 hits but left 14 runners on base.

"It got a little hairy," said Mets manager Mickey Callaway, whose team nearly squandered an early five-run lead. "The guys made pitches when they needed to."

Miami's Jorge Alfaro went 0 for 4 and stranded seven, including the potential tying run at third when he struck out against Wilson to end the eighth inning.

Wilson hit a batter and allowed a single in the ninth but escaped when Miguel Rojas lined into a game-ending double play , with Lewis Brinson caught too far off second and doing a face plant as he tried to get back to the base.

"We capitalized on maybe a baserunning error there at the end," Callaway said.

Wilson said he wasn't thinking about a potential double play when Rojas hit the liner.

The left-hander worked the final 1 1/3 innings because the Callaway wanted to rest closer Edwin Diaz and reliever Jeurys Familia.

Amed Rosario hit a two-run double in the Mets' five-run first inning against Jose Urena (0-2). Wilson Ramos and Dominic Smith each had two hits and an RBI for the Mets, who improved to 4-1.

Brandon Nimmo earned a painful RBI when he was hit on the left knuckle by a pitch with the bases loaded in the seventh. He was awarded first base when a replay review overturned the original ruling that he had fouled the pitch off.

Nimmo left the game after the inning. X-rays were negative, but the ball left lace marks on his the back of his hand.

"It's stiff and tender," he said. "We'll have to see how it feels Wednesday."

"You are disappointed you don't win that game," manager Don Mattingly said. "But on the backside of that, you are extremely proud. That was a battle all night. Guys just kept coming. That is a really good indication of who we are and who we are going to be."

Before the game, Mattingly walked back his criticism of the umpires following Monday's loss . He had suggested the crew was piling on a team that's not expected to contend.

"It was fairly emotional after the game," Mattingly said. "That plays into your words. I know the umpires are trying to get it right. It's not that there's a conspiracy or anything against the Marlins. That's probably an area I regret, going that far."

Mets: OF Juan Lagares was back in the lineup after getting hit on the right hand by a pitch Monday. ... INF Todd Frazier (left oblique) and C Travis d'Arnaud (elbow) will begin rehabilitation assignments Thursday at Class A St. Lucie. ... RHP Seth Lugo, who gave up three runs in 1 1/3 innings, has been battling an illness the past several days, Callaway said.

Marlins: Alfaro was hit on the left hand by a pitch but stayed in the game.

RHP Jacob deGrom (1-0, 0.00), who struck out 10 in six scoreless innings against the Nationals on opening day, will start Wednesday against RHP Trevor Richards (0-0, 1.50). DeGrom is 4-6 against the Marlins, who have beaten him more than any other team, with a 3.60 ERA.