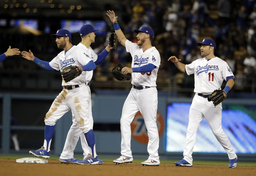 His offense has helped the Dodgers win four of six and jump out to first place in the NL West. Bellinger has hit safely in every game, with five homers and 12 RBIs.

His biggest blast yet came off Madison Bumgarner in the third inning Tuesday night, a grand slam that helped Los Angeles hang on to beat the rival San Francisco Giants 6-5.

Bellinger has struggled against left-handed pitching in the past, and credits his current success to extra work in the batting cage.

"If you're feeling good mechanically, the mental aspect allows you to see more pitches," he said. "Sticking with my approach and trying to execute my plan as best I can."

Manager Dave Roberts says, "It's as good as I've seen him."

Los Angeles has 17 homers, tied with the Seattle Mariners for most in the majors. The Dodgers matched a franchise record with homers in six straight games to start a season, set by the 1954 Brooklyn team. The Dodgers have homered in 10 straight games dating to Sept. 18.

Hyun-Jin Ryu (2-0) allowed two runs and six hits in seven innings. He struck out five and walked none. He was the fifth left-hander in six games that the Giants have faced.

The Dodgers survived a messy ninth when closer Kenley Jansen gave up a bases-loaded walk to Yangervis Solarte to make it 6-3. The Giants began the inning with a double by Evan Longoria and a walk by Buster Posey off Yimi Garcia.

Jansen came in and promptly loaded the bases when he misplayed the ball while covering first. He struck out pinch-hitter Joe Panik before getting pinch-hitter Pablo Sandoval to ground into a game-ending double play, the Dodgers' third of the game.

"I could do a whole lot better," said Jansen, who earned his second save.

The Dodgers led 1-0 on Enrique Hernandez's RBI single that scored Russell Martin, who was safe at first on Bumgarner's throwing error to open the third.

"I just didn't make a good throw," Bumgarner said. "Got there, grabbed it and just threw it in the ground."

With two outs, A.J. Pollock singled, Hernandez took second and Ryu, who walked, went to third, setting up Bellinger's fourth career grand slam that made it 5-0.

"The first three innings of the game I had no feel," Bumgarner said. "I was as lost as I've felt out there in a long time as far as command-wise."

The Dodgers turned three double plays and Hernandez made two stellar defensive plays at second base.

Bumgarner (0-2) gave up five runs - all unearned - and five hits in six innings. He struck out four and walked two. The left-hander has 204 strikeouts against the Dodgers in his career.

Bumgarner rebounded at the plate in the sixth, hitting a two-run shot to left that had the Giants trailing 5-2.

Dodgers: LHP Rich Hill (sprained left knee) will throw a bullpen session in Denver on Saturday, his first since March 19. He has been wearing a knee brace. Roberts said he expects Hill to make a minor league rehab start, but it hasn't been decided. ... LHP Clayton Kershaw (shoulder inflammation) is set to throw four innings and 60 pitches in his rehab assignment Thursday at Triple-A Oklahoma City.

OF Kevin Pillar got an 8 a.m. call informing him that he was being traded from Toronto to San Francisco. He bid his wife and child goodbye and hopped a flight to Los Angeles, arriving in time to pinch-hit in the eighth. He struck out.

"It was a pretty cool moment for me," said Pillar, who is from the San Fernando Valley. "It wasn't the fairy tale ending I was hoping for, but it was nice to get out there, get my feet wet and into a uniform."

Pillar's name was reversed when it appeared on the video board at Dodger Stadium, where he attended games as a child.

"It's a very sacred place to be," he said. "I know how historic this rivalry is."

LHP Derek Holland (0-1, 6.75 ERA) goes for the Giants in the series finale Wednesday. RHP Ross Stripling starts for the Dodgers. He last pitched Friday against Arizona, allowing three hits over 5 1/3 scoreless innings while not factoring into the decision in a 5-4 loss. He struck out five and walked one on 76 pitches.