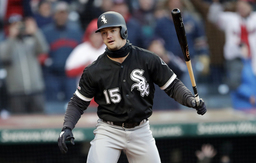 There was a leadoff walk, a fortunate error, a clutch hit and two bases-loaded walks in an eighth inning that seemed to have a little bit of everything.

To Clevinger, it looked like 2016, when Cleveland made it to Game 7 of the World Series.

"It wasn't all these flashy wins all the time," he said, recalling the Indians' memorable run in '16. "It was like grinding out to the eighth, ninth inning, losing a lead, coming back and that's Tribe baseball. That's how we're going to win and I like it."

Roberto Perez drew a bases-loaded walk on four pitches from Dylan Covey in the eighth as the Indians rallied for a chilly 5-3 win in their home opener over the Chicago White Sox on Monday.

The Indians, whose bats have started out as cold as the early-spring weather, did just enough - and got some needed help from the wild White Sox - to score four runs in the eighth after nearly wasting Clevinger's 12-strikeout performance.

As they wait for All-Star shortstop Francisco Lindor, second baseman Jason Kipnis and outfielder Carlos Gonzalez to get healthy, the Indians will have to find offense any way they can.

"Playing in this weather, it's just difficult," manager Terry Francona said. "It's difficult for everybody. I mean you saw their relievers were having a tough time today. When the weather warms up, it'll be easier for everybody. Pitchers included. But in the meantime, you just have to fight for everything you can get."

After the dreadful outing by Covey (0-1), Caleb Frare came in and walked pinch-hitter Greg Allen on five pitches to force in another run and give the Indians a 5-3 lead. White Sox manager Rick Renteria made several visits to the mound in the eighth to try and get his relievers on target, with minimal success.

"Basically, it didn't work," Renteria said. "It didn't work out. I'm fully confident that everyone I put in will be successful. If they do not do well, you can blame me."

Cleveland's Jon Edwards (2-0) picked up the win despite giving up a two-run homer to White Sox rookie Ryan Cordell in the eighth. Brad Hand worked the ninth for his second save.

While the Indians opened their 26th season at Progressive Field, Lindor, who missed all of spring training with a right calf strain, was in Green Bay, Wisconsin, visiting foot and ankle specialist Dr. Robert Anderson.

The team was anxiously awaiting results on Lindor, who injured his left ankle while playing in a minor league game last week. The Indians initially diagnosed the injury as an "acute sprain" but sent Lindor to Anderson for a second opinion. The team's medical director accompanied Lindor.

Francona said the Indians will have an update on Tuesday.

Once again, a group of Native Americans and other supporters demonstrated outside the ballpark against the Indians for their nickname and Chief Wahoo logo.

This is the first time in decades the smiling, red-faced logo is not on the team's jerseys or caps, but protesters would like to see more done to promote American Indian causes.

The Indians have won three straight home openers for the first time since 1997-99.

Chicago has lost 24 of 31 to Cleveland and nine of the last 10 at Progressive Field.

White Sox: SS Tim Anderson was a late scratch when his wife went into labor. He is expected to rejoin the team Thursday when the White Sox return to Chicago. Rondon moved from second to short.

Indians: Francona has no timetable for Kipnis, who is on the injured list with a strained calf. Kipnis has made some progress and recently ran the bases. ... OF Bradley Zimmer recently strained a side muscle while recovering from shoulder surgery. Francona said the new injury "knocked him back about a week or 10 days." ... Gonzalez, who signed a minor league contract March 19, will play in the season opener for Triple-A Columbus on Thursday.

Following an off day, the clubs will conclude the two-game series Wednesday with Cleveland ace Corey Kluber facing Carlos Rodon. Kluber's 13 career wins against the White Sox are his most against any opponent.