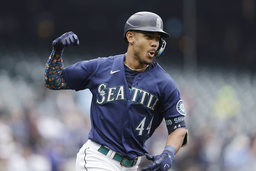 The Seattle Mariners and host Toronto Blue Jays, who entered the American League together in 1977, will meet in the postseason for the first time on Friday afternoon.

The Blue Jays will start right-hander Alek Manoah (16-7, 2.24 ERA) in the opener of the best-of-three wild-card series. The Mariners will open with right-hander Luis Castillo (8-6, 2.99).

The Blue Jays (92-70) took the first AL wild-card spot to earn home-field advantage for all games in the series.

The last time the teams met, the Mariners (90-72) swept a four-game series from the visiting Blue Jays on July 7-10.

"When we (last) played them, we were kind of not going great compared to right now," Blue Jays interim manager John Schneider said. "I think we match up pretty closely. We were on a tough road trip the last time we played them."

This will be the first trip to the playoffs for Seattle since 2001. After a slow start, they recovered to take the second AL wild-card spot.

"Ninety wins, man," Mariners manager Scott Servais said. "It's hard to get there, and doing it in back-to-back years."

"We're 10 games below .500, and we go 61-33 from that moment forward," Servais said. "That's a credit to our players. The game is about the players. It's always been about the players and always will be. Our guys, they enjoy playing, they enjoy competing. They don't back off. It doesn't matter what the stakes are. And that's what excites me so much about going forward."

Seattle was energized by rookie star Julio Rodriguez, who batted .284 with 28 homers, 75 RBIs and 25 steals.

The Blue Jays were swept in two games in the 2020 wild-card series by the Tampa Bay Rays. They lost in the American League Championship Series in 2015 and 2016.

The Blue Jays also scuffled at times early this season and the sweep in Seattle was basically the end of Charlie Montoyo's tenure as manager.

They were 46-42 on July 13 when Schneider replaced Montoyo. They finished the season with 92 wins, one more than last season when they missed a wild-card spot on the final day of the season.

The Blue Jays won two of three from the Mariners in Toronto on May 16-18.

"They have really good pitching, obviously, with their starters and their bullpen," Schneider said. "(Castillo) is really good. He's a tough righty with a good changeup and good (velocity). He's having a good run over in Seattle, but I think our lineup has a tendency to do really well against good pitchers. It will be a tough match for sure, but it's one we are up for."

Castillo has faced Toronto once in his career, allowing two runs, seven hits and striking out five without a walk in six innings to take the loss at on May 20 when he was with the Cincinnati Reds. He was traded to the Mariners on July 29. The 29-year-old is 4-2 with a 3.17 ERA in 11 starts with Seattle.

Manoah lost his one career start to Seattle when he allowed two runs and three hits in 7 1/3 innings on July 9.

It was an easy decision for Schneider to open with the 24-year-old Manoah.

"Seeing him in those really big moments and obviously the month of September that he's had," Schneider said. "I like the way he matches up against anybody, but confident in him embracing the atmosphere and doing what he's been doing all year."