Yankees head to Texas as Aaron Judge still looking for homer No. 62 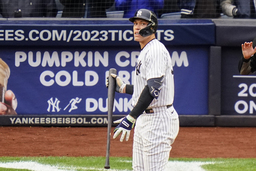 Judge remains at 61 home runs as the New York Yankees face the Texas Rangers on Monday in the first of four games in Arlington, Texas.

The Yankees lost 3-1 to the Baltimore Orioles on Sunday at Yankee Stadium, with Judge going hitless in three at-bats with a walk.

The Yankees (97-61) and Rangers (66-92) will play four games in three days at Globe Life Field, with a doubleheader set for Tuesday.

The Rangers lost 8-3 to the Los Angeles Angels on Sunday, and they have now dropped five straight.

Already clinched as the AL's No. 2 seed, the Yankees will receive a first-round bye.

While Judge remains one of MLB's top storylines, the Yankees are dealing with some injury issues, particularly with their bullpen. On Sunday, manager Aaron Boone said rookie reliever Ron Marinaccio is dealing with a shin injury.

Marinaccio exited in the eighth inning, and his status for the series with the Rangers is in question.

"It's something that he's been kind of dealing with all year," Boone said Sunday in his postgame news conference. "It was just bothering him a little bit more today while he was pitching. Wanting to get him out of there. Didn't want to mess with it too much."

The Yankees bullpen recently lost the services of closer Clay Homes to a right shoulder strain.

Perez will be making his 32nd and final start of his All-Star season. In 190 1/3 innings, the southpaw has 167 strikeouts.

Looking at the big picture, a hot topic in Texas is whether this will be Perez's last start as a member of the Rangers. The 31-year-old will be a free agent, after being a bargain at $4 million in 2022.

Perez has expressed a desire to return to Texas.

After his last start on Sept. 28, Perez told reporters: "I'm better this year and I believe that I'm going to be better next year. I know how to pitch, and I know how to control my emotions. I'm just trying to enjoy (the rest of) my season this year."

Judge has played in 24 games against the Rangers in his career, with eight home runs. In four games at Globe Life Field, he has no homers in 15 plate appearances.

For his career, Severino is 0-2 with a 5.40 ERA in four games, three starts, against Texas.

The Yankees have been a slightly better than a .500 team on the road, entering the series with a 40-37 record.

In Sunday's game, Rangers second baseman Marcus Semien achieved a milestone, scoring his 100th run. It's the second straight year that the veteran reached the century mark in runs. With the Toronto Blue Jays in 2021, he scored 115 times.