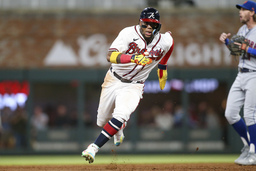 If history isn't repeating itself this weekend for the Atlanta Braves and New York Mets, it's certainly playing a familiar tune.

The host Braves will look to complete a three-game sweep -- and the Mets will aim to stop an ill-timed skid and earn a pivotal victory -- when the National League East rivals meet for the final time in the regular season Sunday night.

The Braves moved into first place in the NL East Saturday night when Matt Olson and Dansby Swanson combined for two homers and drove in all of Atlanta's runs in a 4-2 victory.

The Braves (99-59) are a game ahead of the Mets (98-60). The two victories by Atlanta have tied the season series at 9-9. The winner of Sunday's finale will have the tie-breaker should the teams finish with the same record.

The winner of the NL East will get the second bye in the playoffs while the runner-up will open the postseason in a best-of-three wild-card round on Friday and be placed on the same side of the bracket as the top-seeded Los Angeles Dodgers.

The defending World Series champion Braves are alone in first for just the second time this season. They trailed the Mets by 10 1/2 games through May 31 but are 76-32 since then.

"This is no time to celebrate," Swanson said. "There's four games left. So much left to be had of this season."

With a one-game lead entering the series and needing just one win to secure the tiebreaker, the Mets appeared to be in the better position on Friday night. But the roles Olson, Swanson and Austin Riley have played in the first two games are conjuring memories of late '90s collapses for New York in Atlanta.

In 1998, the Mets were swept in the final series of the season when one win would have earned them the NL wild-card berth. On Sept, 21, 1999, New York was one game out of first place prior to a three-game series but was swept as future Hall of Famer Chipper Jones went 5-for-9 with four homers and seven RBIs in 12 plate appearances.

Olson, Riley and Swanson are batting a combined .478 (11-of-23) with five homers and seven RBIs in this series. All of the homers and RBIs have come in 17 plate appearances against Mets co-aces Jacob deGrom and Max Scherzer.

Morton didn't factor into the decision in his most recent start on Sept. 25, when he allowed six runs over 4 2/3 innings in the Braves' 8-7, 11-inning win over the Philadelphia Phillies. Bassitt hasn't pitched since Sept. 23, when he earned the win after surrendering two runs over eight innings as the Mets beat the Oakland Athletics 9-2.