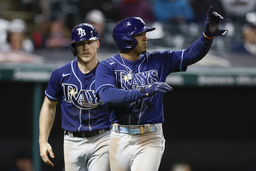 The Houston Astros will try again Friday to wrap up the best record in the American League.

The Tampa Bay Rays, who open a three-game series at Houston on Friday, will make another attempt at clinching a playoff berth.

The Astros were off on Thursday after wasting an exceptional performance from ace right-hander Justin Verlander in a 5-2, 10-inning loss to the visiting Arizona Diamondbacks on Wednesday.

With six games remaining on their schedule, the Astros (102-54) hold a 5 1/2-game lead over the New York Yankees (96-59) and need of just one victory to secure home-field advantage throughout the AL postseason.

Earning that designation seems inevitable at this stage, but the loss to Arizona delayed the Astros' gratification for at least 48 additional hours.

"We had some opportunities to get that magic number (reduced to zero)," Astros manager Dusty Baker said. "I guess we'll just have to do it against Tampa Bay."

The Rays (85-71) squandered an opportunity to clinch something significant when they allowed two runs in the eighth inning of their 2-1 loss to the host Cleveland Guardians on Thursday.

Instead of wrapping up their fourth consecutive postseason berth, the Rays fell to 3-7 in their past 10 games and 7-13 since closing to within 3 1/2 games of the Yankees in the AL East on Sept. 9.

The latest defeat also saw the Rays fall a half-game behind the Seattle Mariners (85-70) for the second of three AL wild cards. Tampa Bay is five games up on Baltimore (80-76) with six to play, and the Rays own the tiebreaker against the Orioles.

"There's disappointment anytime we lose," Rays manager Kevin Cash said of failing to clinch a postseason bid. "The disappointment was we were up 1-0 in the eighth inning and we lost."

Framber Valdez (16-5, 2.69 ERA) will start the series opener for the Astros on Friday. He set a major league single-season record by making 25 consecutive quality starts, but that streak was snapped in his latest outing.

The left-hander allowed seven runs (four earned) on 11 hits and one walk with six strikeouts over 5 1/3 innings during the Astros' 11-10 win over the Baltimore Orioles on Saturday. Valdez yielded season highs in hits and runs while logging fewer than six innings for just the third time in 2022.

Valdez is set to make his first career appearance against the Rays.

Drew Rasmussen (10-7, 2.85 ERA) is the scheduled starter for the Rays on Friday. The right-hander took his third consecutive loss on Saturday when he allowed one run on three hits and two walks with five strikeouts over 6 1/3 innings in a 3-1 setback to the Toronto Blue Jays.

Rasmussen is 1-1 with a 3.27 ERA over two career starts against the Astros. He faced them in St. Petersburg, Fla., on Sept. 19, and he took the loss after allowing four runs on six hits and one walk with three strikeouts over six innings.