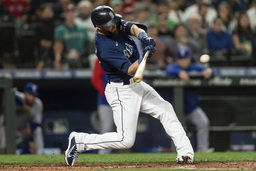 A baby born in early 2001, the last time the Seattle Mariners had champagne on ice in the clubhouse to celebrate clinching a playoff berth, would now be old enough to legally drink the bubbly.

The Mariners (85-70) reduced their magic number to one for an American League wild-card berth with a wild 10-9 victory in 11 innings against the visiting Texas Rangers on Thursday night.

That means the Mariners could snap their 20-season playoff drought -- the longest in the four major North American sports -- on Friday night. They could do it with a loss by the Baltimore Orioles (at the New York Yankees) or a victory in the opener of their three-game series against the visiting Oakland Athletics.

After squandering a 7-4 lead, the Mariners rallied in both the 10th and 11th innings. J.P. Crawford's liner off the glove of diving Rangers third baseman Josh Jung brought home the winning run.

"I have heard it for seven years," Mariners manager Scott Servais said of talk about the playoff-less streak. "Every day when I get up in the morning and I drive to work, that's what's on my mind. But the goal is winning the World Series. It's not just to end the drought."

But then the normally reserved Servais broke character with a rare prediction.

"We will end the drought (Friday)," Servais said. "We're going to and it's a beautiful thing."

The Mariners are scheduled to send right-hander Logan Gilbert (13-6, 3.29 ERA) to the mound in the series opener against A's lefty Ken Waldichuk (1-2, 7.15), a rookie who will be making his sixth career appearance and first against Seattle. Gilbert is 1-0 with a 4.30 ERA in six career starts versus Oakland.

The A's (56-100) have lost four in a row, including a 4-2 defeat Thursday against the host Los Angeles Angels.

They were no-hit for 7 2/3 innings by two-way sensation Shohei Ohtani before A's rookie Conner Capel singled off the glove of shortstop Livan Soto.

"I mean, we all have pride," A's manager Mark Kotsay said. "No one wants to go through a no-hit performance. I've been on that end myself as a player. So the dugout knew what was going on, the dugout was talking."

Capel might have provided the understatement of the year when he said, "(Ohtani's) got some good stuff."

"He had a slider working and his cutter," Capel added. "You just got to go up there and battle, try to put the barrel on it and put a good swing on."

The A's reached 100 losses for just the second time since they moved to Oakland in 1968.

"Each game, I want to win, they want to win," Kotsay said. "So the big-picture stuff can wait until Oct. 6 when the season ends. This isn't about developing here. This is about winning baseball games, and we haven't done our job and won enough baseball games to finish the season where we wanted to be."