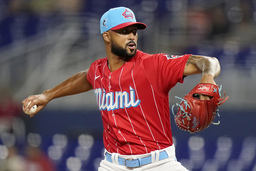 After missing a golden opportunity to move into the final wild-card spot in the National League, the Milwaukee Brewers will turn to right-hander Corbin Burnes against the visiting Miami Marlins on Friday night.

Burnes, last year's NL Cy Young winner, will be opposed by Miami right-hander Sandy Alcantara, among the favorites for the award this season.

Miami, 33 games behind in the NL East, took on the spoiler role in the series opener with Milwaukee on Thursday, rallying for a 4-2 victory on Avisail Garcia's eighth-inning grand slam off Freddy Peralta, who came off the injured list on Sunday and was pitching in relief for the first time after 16 starts.

Garcia hit 29 homers last season as a member of the Brewers and is playing in American Family Field again.

Milwaukee failed to score after getting two runs in the second on Thursday. The Brewers outhit the Marlins 9-5 and stranded eight runners. Milwaukee had the bases loaded in the third and sixth innings but failed to score, falling to 12-48 when scoring three runs or less.

In the race for the third NL wild-card spot, Milwaukee (83-73) remained a half-game behind Philadelphia, which lost its fifth straight Thursday as the Chicago Cubs completed a three-game sweep with a 2-0 victory.

Milwaukee will play its final six games at home, while the Phillies will finish with seven on the road. Philadelphia (83-72) holds the tie-breaker over the Brewers.

"There's nothing to talk about," Counsell said. "We still have an opportunity in front of us, and we've got to come out and play a good game tomorrow."

"He got us into the seventh, which is what Corbin does," Counsell said after Burnes' last start. "He does it regularly, and that was really important."

Over his past seven starts, Burnes is 2-3 with a 5.31 ERA. He is 0-1 with a 3.68 ERA in four career appearances vs. Miami, including two starts. He has faced the Marlins once this season, giving up one run in seven innings, but he did not get the decision in that Brewers' 2-1 victory on May 13.

His last time out, he allowed just one run on a first-inning homer in eight innings, striking out 11, in a 4-1 win over the Nationals on Saturday. In the start before that, he tossed his fifth complete game of the season, giving up one run on seven hits in a 3-1 victory.

"It's always hard, because I don't want to leave the game," Alcantara said after his last start. "Doesn't matter how many innings I throw. They know that I want to finish all the games. Ninety-nine pitches, that's nothing for me. I think I've been doing a pretty good job trying to prepare myself to go outside and give my heart for my team."