Albert Pujols returns to L.A. in quest for 700th homer 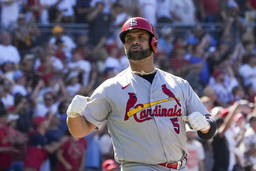 There could not be a better time for the St. Louis Cardinals to bring a pair of quests to Los Angeles for a matchup with the team that owns the best record in baseball.

With a magic number of five to clinch the National League Central title, the Cardinals will open a three-game series against the Dodgers on Friday. The visit also pits Albert Pujols against his former team in his bid to reach 700 career home runs.

Pujols, who was signed by the Dodgers midway through last season, reached 698 career home runs last Friday against the Cincinnati Reds but hasn't hit one since in six games. In 85 games with the Dodgers last season, he hit 12 home runs.

The Cardinals will see a Dodgers team that has not played its best baseball of late. Los Angeles did, however, pull off a 3-2 victory over the Arizona Diamondbacks on Thursday with a game-ending pinch-hit RBI single from Mookie Betts in the ninth inning.

The Dodgers scored just six runs over the last three games against Arizona.

"Every win is important (but) we have not played well the last couple of days," Betts said. "We still have a lot of wins and we have played well a lot so we can't really panic over a couple of bad offensive games, and defensive games. But that's the ebbs and flows of a season."

The Dodgers will send left-hander Andrew Heaney (3-2, 2.66 ERA) to the mound. Heaney and Pujols spent six seasons together on the Los Angeles Angels (2015-20), with both departing during the 2021 season.

Pujols has never faced Heaney. He is 3-for-9 against Dodgers closer Craig Kimbrel, but does not have a home run against the right-hander.

In three games against the Dodgers earlier this season, Pujols had just two hits in 11 at-bats but one was a home run, his 685th. For his career, he has 20 home runs and a .294 batting average in 109 games vs. Los Angeles.

Heaney has just one start against the Cardinals and it came in 2014 when he gave up five runs on eight hits in 3 2/3 innings, ending up with a no-decision.

The Cardinals ended a three-game losing streak Thursday afternoon at San Diego with a 5-4 victory. While St. Louis' Brendan Donovan delivered the big blow with a grand slam, Lars Nootbaar ended the Cardinals' streak of 47 innings without an earned run by going deep in the first inning.

"I was just trying to hit a fly ball, get one across and cut into the lead a little bit," Donovan told reporters. "It just kind of ran into my barrel a little more than I thought it would. It was one of the bigger swings I've had this year, so that was pretty cool for me."

The Cardinals will send veteran left-hander Jose Quintana to the mound Friday. Quintana (5-6, 3.16) has been solid since joining St. Louis at the trade deadline from the Pittsburgh Pirates, going 2-1 with a 2.44 ERA over nine starts for his new club.

Quintana has fared well against the Dodgers in his career, going 2-1 with a 2.02 ERA in 11 appearances (eight starts).