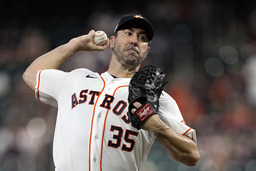 The pitchers with the two best ERAs in the American League will go head to head when the Chicago White Sox host the Houston Astros in the second game of a four-game series on Tuesday night.

White Sox right-hander Dylan Cease is set to take on Astros right-hander Justin Verlander in one of the most anticipated pitching matchups of the season.

"As a fan, for sure, you got Cease for us who has been killing it, and Verlander has been doing it for so long," White Sox outfielder AJ Pollock said. "I'm sure people will be tuned in."

Astros manager Dusty Baker said, "I'll tell you one thing, I was thinking about it today. This is like when I was a kid: (Sandy) Koufax and Juan Marichal, or Don Drysdale and Gaylord Perry. Ferguson Jenkins and Bob Gibson. I'm going to have to be really careful and make sure I don't spectate and manage."

Verlander, 39, has made 46 starts against the White Sox in his career, going 22-14 with a 3.72 ERA. He owns four complete games against them, his highest total against any team. The White Sox beat him on June 18 when he yielded seven runs (four earned) on nine hits in 3 2/3 innings.

Cease, 26, has lost all three of his career starts against the Astros while compiling a 6.60 ERA. He hasn't faced Houston this year.

White Sox closer Liam Hendriks said it will be exciting to watch Verlander, a future Hall of Famer who underwent Tommy John surgery in October 2020 and missed the 2021 season, going against Cease, who is just making a name for himself.

"It's kind of the changing of the guards," Hendriks said. "That's no slight against Justin being older. This has to be one of the best, if not the best season, after Tommy John in history. It's incredible what he's been able to do."

Verlander leads the majors in ERA, wins and WHIP (0.86), while Cease is tied for seventh in wins and is third in ERA and strikeouts (174).

"The more success I'm having, the more it's expected, which is great," Cease said. "To me, it's exciting, and I'd much rather it be this way than just having it viewed as an average game. It's exciting that it's viewed as a big matchup."

The White Sox also would like to keep their momentum going after they posted one of their most exciting wins of the season. Chicago came from behind to beat Houston 4-2 in the series opener on Monday night, its fourth straight victory.

The Astros had a 2-0 lead with two outs in the bottom of the eighth inning, but Baker lifted starting pitcher Jose Urquidy after he gave up an infield single to Pollock.