Skidding Guardians aim to rebound in DH vs. Twins 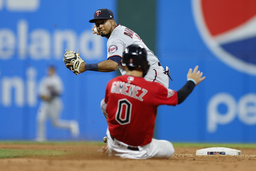 The Cleveland Guardians' slump reached a new low on Monday.

An 11-1 loss to the visiting Minnesota Twins was Cleveland's worst defeat since a setback by the same score on Sept. 12, 2021, vs. the Milwaukee Brewers.

The Guardians, who sit in second place in the American League Central, have lost five in a row heading into Tuesday's doubleheader against the first-place Twins.

Cleveland has lost seven of its past nine home games against Minnesota, getting outscored 54-19 in that span.

The Twins, who have won three in a row overall, hold a 4-3 edge in the season series against the Guardians.

The Twins will recall rookie Josh Winder (2-2, 3.68 ERA) from Triple-A Saint Paul to start one of the Tuesday games, while left-hander Devin Smeltzer (4-1, 3.05 ERA) will start the other contest. It was unclear which pitcher would start which game.

Cleveland will recall rookie Konnor Pilkington (1-0, 3.67 ERA) from Triple-A Columbus to start one of the games. Right-hander Zach Plesac (2-5, 4.17 ERA) will start the other game. As with the Twins, the Guardians didn't reveal the order of their starters.

Winder has never faced the Guardians.

Smeltzer is 2-2 with a 4.31 ERA in seven lifetime appearances (five starts) against Cleveland, 0-1 with a 4.82 ERA in two starts at Cleveland. He threw six shutout innings for a 1-0 win over the Guardians on Thursday. Nick Gordon's third-inning home run off Plesac was the difference in the game.

Plesac also lasted six innings in that contest. He is 0-2 with a 5.28 ERA in five career starts vs. Minnesota.

Pilkington will oppose the Twins for the first time.

The Guardians will hope to slow Minnesota third baseman Gio Urshela, who played in Cleveland in 2015 and 2017 before being traded to the Toronto Blue Jays in May 2018.

Urshela is reminding the Guardians of his talent this season. He went 3-for-5 with two runs, two doubles and two RBIs on Monday. In seven games vs. the Guardians this season, Urshela is batting .379 (11-for-29) with eight runs, three doubles, a triple, three home runs and eight RBIs.

Since coming off the COVID-19 injured list on June 7, Minnesota's Carlos Correa has been on a tear. The shortstop is batting .343 (24-for-70) with five homers and 10 RBIs in 17 games. He smashed a two-run homer on Monday.

Twins center fielder Byron Buxton has been bothered by a bad knee for most of the season, but the team doesn't plan on putting him on the injured list.

"(We) don't know if we took a month off just what that would do, if it's going to solve the issue, if it's just going to somewhat help or if it's going to be something if he took significant time off, would he just be dealing with the same symptoms within a few games of returning?" Minnesota manager Rocco Baldelli said.

The Guardians hope for the return of an offense that has produced just nine total runs during the five-game losing streak. They managed just five hits on Monday.

Meanwhile, Cleveland's pitching staff has allowed 26 total hits the past two games. The bullpen was one of the most effective in the league for much of the season, but it is struggling, too. On Monday, Guardians relievers -- including Ernie Clement, who handled the ninth inning -- gave up four runs on six hits in three innings.

"They are human," Cleveland manager Terry Francona said of his relievers. "Sometimes the mental starts to drain you."

The Guardians have had three different pitchers come up from the minors and pitch over the past week -- Yohan Ramirez (who was sent back to the minors after his Thursday outing), Tanner Tully (who was designated for assignment on Monday after his Saturday outing) and Ian Gibaut (who tossed 1 1/3 scoreless innings on Monday).

"We're trying to protect our bullpen as much as we can," Francona said.