Nestor Cortes will try to get Yankees back on track vs. Astros 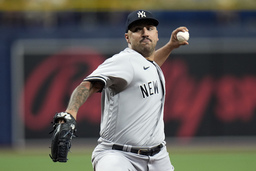 On Thursday, the Houston Astros sustained their most frustrating loss of the season when Ryan Pressly allowed a tying three-run homer to Aaron Hicks and Ryne Stanek yielded a single on a 3-0 pitch to slugger Aaron Judge, allowing the New York Yankees to pad their MLB-best win total.

The Astros quickly rebounded with a pair of impressive pitching performances and, coming off the 14th no-hitter in team history, Houston can become the third opponent to win a series from the Yankees Sunday afternoon when the teams conclude a four-game set at Yankee Stadium.

Houston is attempting to join the Baltimore Orioles and Chicago White Sox as the only opponents to take a series from the Yankees. The Orioles held the Yankees to one run in their wins on April 15 and 17 while the White Sox allowed one run in a doubleheader sweep in New York on May 22.

Houston has followed a similar formula by using its pitching to silence a Yankees team who won 15 straight home games when it pulled off a comeback on Thursday.

On Friday, Justin Verlander allowed one run and four hits in seven innings of a 3-1 win. A day later, Houston's pitching was even more impressive when Cristian Javier struck out a career-high 13 hitters in seven innings and combined with Hector Neris and Pressly on a no-hitter.

"It just shows the resilience of this team and the ability to forget," Houston manager Dusty Baker said. "They're a good team, especially here in New York looking at their record. These guys they don't usually carry yesterday into today. That was an awfully tough loss and very few people slept."

The Astros tossed the third no-hitter this season in the majors and their first since Verlander achieved the feat Sept. 1, 2019. Javier threw a career-high 115 pitches before Neris worked around two walks in the eighth and Pressly retired Giancarlo Stanton for the final out.

"A no-hitter is pretty special anywhere you do it," Pressly said. "The fact it was in here, Yankee Stadium -- that's a really good lineup over there. Those are some good hitters. It's special but I think if you throw a no-hitter in general it's just going to be special."

The Yankees are on their fourth losing streak of the season and first since a two-game skid on May 28-29. They struck out 15 times as Judge, Stanton and Anthony Rizzo combined for seven strikeouts.

New York was no-hit for the first time since six Houston pitchers combined to achieve the feat June 11, 2003.

Jose Urquidy (6-3, 4.68 ERA), who faces the Yankees for the first time in his career, starts for Houston and looks to win consecutive starts for the second time this season. Urquidy last pitched in Tuesday's 8-2 win over the New York Mets when he allowed one run on four hits in six innings while throwing a season-high 104 pitches.

Nestor Cortes (6-3, 2.31), who has allowed four runs in two of his past three outings, goes for the Yankees. Cortes has seen his ERA increase from 1.50 since pitching six shutout innings June 2 against the Los Angeles Angels.

Cortes last pitched in Tuesday's 5-4 loss at Tampa Bay when he allowed four runs and six hits, including a season-high four homers in 4 1/3 innings to match his second-shortest outing of the season.