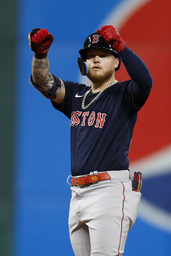 The Cleveland Guardians' streak of winning seven consecutive series came to an end Saturday in a 4-2 loss to the visiting Boston Red Sox.

The Guardians were sitting atop the American League Central Division coming into the three-game series but dropped a game behind the Minnesota Twins after Saturday's defeat, their third loss in a row.

The Red Sox are gunning for a three-game sweep of Cleveland on Sunday. They will send veteran left-hander Rich Hill (3-4, 4.35 ERA) against the Guardians. He's 1-1 with a 4.43 ERA lifetime in 11 career appearances (four starts) against Cleveland.

The Guardians will try to salvage the final game of the series with right-hander Aaron Civale (2-3, 7.25), who will be making his first career appearance against Boston.

Cleveland manager Terry Francona holds the Red Sox hitting in high regard. Boston banged out 10 hits on Saturday, including its 18th homer in its last 14 games.

"I told him this is, kind of, the best game of the season for him, regardless of the results," Cora said. "He was patient. He worked the count, hit the ball the other way."

In his final at-bat in the eighth on Friday, he hit a screaming line drive that was stabbed by Cleveland second baseman Andres Gimenez. It had an exit velocity of 100.6 mph and a hit probability of 84 percent, according to the Guardians' media-relation notes.

"The kid made a great play, but as far as the quality of the at-bats, tonight was (Verdugo's) best night of the season," his manager said.

He was 1-for-3 on Saturday. In the first two games of the series, he's 3-for-8 with two doubles, a home run and four RBIs.

Teammate Rafael Devers must love hitting in Progressive Field. In his last seven games in Cleveland, he is batting .483 (15-for-31) with eight extra-base hits and seven RBIs.

"They make contact," Francona said. "They put the ball in play. They don't strike out.

"They are a handful."

He also said he believes Cora is one of the top managers in baseball.

"He's really good," Francona said. "I have a lot of respect for him as a manager and a friend."

Guardians third baseman Jose Ramirez had a 13-game hitting come to an end on Saturday. He was 0-for-3 with an RBI, his 63rd of the season.

Cleveland managed just six hits against rookie right-hander Josh Winckowski (3-1, 3.60). Its only extra-base hit was Amed Rosario's run-scoring triple in the third. His five triples are tied for the major league lead. In the month of June, Rosario has hit safely in 19 of 21 games and is batting .352 (32-of-91).

Myles Straw continued his slump with an 0-for-4 night. His batting average has plummeted to .201.

Francona said he'd continue to play Straw because of his prowess in center field.

"It's been a frustrating month for him swinging the bat," he said. "He is that good in the outfield. He'll return to where he was (at the plate)."