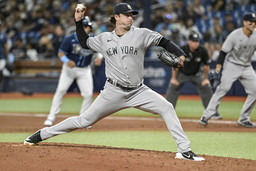 The Houston Astros showed how quickly they could recover from their most frustrating loss of the season.

After holding on for a Friday victory to even their four-game series at Yankee Stadium at one win apiece, the Astros will attempt to give the New York Yankees consecutive losses for the first time in more than a month on Saturday afternoon.

The Astros, who have seven wins in their past nine games, recovered after blowing a pair of three-run leads in a 7-6 loss on Thursday. In that contest, Houston closer Ryan Pressly served up a game-tying, three-run homer to Aaron Hicks in the ninth, and Ryne Stanek yielded a game-ending single to Aaron Judge later in the inning.

"They're good," Houston manager Dusty Baker said. "I don't have to blow their whistles because everybody knows that they're good. Their record's indicative of that.

"We're good, too. We just have to go out and play nine innings. You got to play all 27 outs, that's one thing you got to do against them."

Baker stayed away from Pressly on Friday to avoid using him for a third straight day. Rafael Montero survived two walks in the ninth inning to log his fifth save.

"It's two good teams going at it," Verlander said, "so these are the kind of games you expect to have."

The Astros could get a key piece to their lineup back this weekend. Rookie shortstop Jeremy Pena could be activated from the injured list after being sidelined since June 14 due to a left thumb injury.

The Yankees are 23-6 since losing three straight on May 22-23 in a doubleheader against the Chicago White Sox and a 6-4 defeat to the Baltimore Orioles. They are looking to dodge their fourth losing streak this season. New York also lost two straight April 10-11 and May 28-29.

Giancarlo Stanton homered for the second straight game but Judge went 0-for-4. Judge was kept in the on-deck circle when DJ LeMahieu made the final out, and will head into Saturday with a .299 average, his first time under .300 since being at .296 following a 5-1 win over the White Sox on May 15.

Gerrit Cole, who has taken two no-hitters past this sixth inning this month, will start for the Yankees on Saturday. Cole (6-1, 3.14 ERA) retired the first 20 hitters on June 3 against the Detroit Tigers before yielding two singles. He then came within six outs of a no-hitter before allowing a leadoff single to Tampa Bay's Isaac Paredes on Monday.

Cole took a no-decision against the Rays and has allowed one run on six hits while recording 19 strikeouts in 13 1/3 innings over his past two starts since allowing five homers in Minnesota on June 9.

Cristian Javier (4-3, 3.07 ERA), who has allowed two runs or fewer in seven of his nine starts this year, is set to start for Houston on Saturday. Javier last pitched on Sunday in a 4-3 win over the visiting White Sox, when he allowed one run in five innings.

Javier's only previous appearance against the Yankees was three scoreless innings as a reliever in Houston's 1-0 loss to Cole last year.