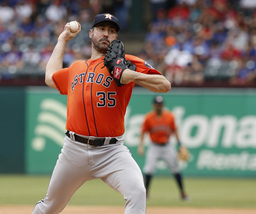 The Houston Astros survived an eight-game road trip through Arlington, Texas, and Anaheim, Calif., and somehow earned a split despite serious concerns regarding the depth of their starting pitching.

By late Thursday evening, their attention had turned to a more immediate problem: managing some rest during the short turnaround between the series finale against the Los Angeles Angels and the start of their three-game series against the visiting Texas Rangers on Friday.

With an inexplicably late scheduled start in Orange County, the Astros were scheduled to arrive in Houston at 5:15 a.m. on Friday morning. Instead of having the benefit of an afternoon start to cap their series, which Houston split with a 6-2 victory Thursday, the Astros faced a late departure from California and a home landing approximately 14 hours before first pitch against Texas.

"I'm going to try," Astros outfielder George Springer said of squeezing in some sleep on the flight home. "I'm going to force myself to."

Right-hander Justin Verlander (11-4, 2.98 ERA) will start the series opener for the Astros. He was victorious in his last outing, allowing two runs on four hits and one walk with seven strikeouts over six innings in a 12-4 victory over the Rangers on Sunday in Arlington. It marked the first time in six starts that Verlander did not allow a home run.

Left-hander Mike Minor (8-4, 2.73 ERA) gets the start for the Rangers opposite Verlander. Texas is 0-2 in his two starts this month, with Minor posting a 6.75 ERA in those outings including a 7-6 loss to the Astros on Saturday when he allowed four runs on seven hits and three walks over five innings.

What was a promising start to the second half quickly fizzled for the Rangers. Texas has lost four consecutive games and has been outscored 40-10 over its past three contests. Friday in Houston marks the start of a 10-game road trip that includes three games in Seattle and four in Oakland.

The Rangers find themselves in need of positive momentum.

"We've got to play better, obviously," Texas manager Chris Woodward said, "overall in pretty much every way. We've got to hit better, we've got to pitch better -- I mean, it's pretty clear cut we're not doing what it takes to win ballgames right now. We've got to look in the mirror and say we've got some pretty tough opponents coming up.

"We played really well against the Astros the first three games, and we've got a tough pitcher coming up with Houston. I don't think our guys are going to back down at all. I think we've been pretty resilient all year. Our guys have just got to step it up and play better."