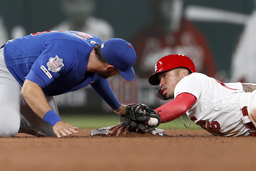 The Chicago Cubs expect to welcome veteran slugger Nicholas Castellanos on Thursday night when they wrap up a three-game series on the road against the St. Louis Cardinals.

Chicago acquired Castellanos before Wednesday's trade deadline from the Detroit Tigers in exchange for a pair of minor league pitching prospects. The 27-year-old is a .274 lifetime hitter with 104 homers and 424 RBIs in 837 games.

Cubs manager Joe Maddon thinks those numbers could tick upward now that Castellanos will not spend half of his games in Detroit's cavernous Comerica Park, which favors pitchers over hitters. Castellanos will get an opportunity to play both corner outfield positions for the Cubs and also can play third base.

"I've seen him in the American League," Maddon told reporters after the deal. "The guy's a good hitter. I always thought he patterned himself after (Miguel) Cabrera a little bit early on. I saw a lot of balls go in that gap.

"Really good hitter. Very good against left-handers. I think getting away from that ballpark is going to help him a little bit, also. A lot of guys that get out of that place that are good offensive players become even better."

Meanwhile, the Cardinals will try to win the rubber match against their longtime division rivals. The teams are tied for first place in the National League Central with two months remaining in the regular season.

St. Louis won the series opener 2-1 on Tuesday, and Chicago bounced back to win the second game of the series 2-0 on Wednesday.

Unlike Chicago, the Cardinals decided against making a big-splash deal before the trade deadline. The team's lone move was to send veteran infielder Jedd Gyorko to the Los Angeles Dodgers in exchange for left-hander Tony Cingrani -- who is on the 60-day injured list -- and 19-year-old pitching prospect Jeffry Abreu.

Cardinals president of baseball operations John Mozeliak addressed fans' frustration that he failed to do more.

"I can understand why fans would feel that way," Mozeliak said to reporters. "In fairness, for the last week, we've been working tirelessly to try to do something.

"It's always when you have deadlines and you don't come up with something, people aren't happy. I can't come up with an excuse that's going to make that go away, but I hope people realize that we're still excited about our club. We still think we can win."

St. Louis will try to win the series finale behind right-hander Jack Flaherty (4-6, 4.17 ERA), who is set to make his 22nd start of the season. Flaherty has posted a 1.48 ERA (four earned runs in 24 1/3 innings) over his past four starts, with seven walks and 30 strikeouts during that span.

Chicago will counter with left-hander Jon Lester (9-6, 3.63), who is set to make his 21st start. Lester is coming off a strong performance against the Milwaukee Brewers on Saturday, in which he tossed seven scoreless innings but received a no-decision.

St. Louis is 30-23 at home this season. Chicago is 21-32 on the road. Before Tuesday, the home team had won all 10 games during the season series between the longtime division rivals.