Red Sox have Price armed to finish sweep of Rays 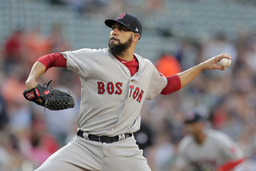 Price (7-3, 3.61 ERA) will be on the mound as Boston attempts to sweep the three-game series from the Rays on Wednesday.

The series finale will be a matinee in St. Petersburg, Fla.

Price is 1-1 with a 2.65 ERA in three starts against his former club this season, including a pair of 10-strikeout performances.

In his career, the 2012 Cy Young Award winner has made 17 appearances (16 starts) against the Rays and is 6-5 with a 3.16 ERA. He will be looking to maintain the momentum established Monday by Rodriguez and Tuesday by Sale.

During a mound visit in the sixth inning Tuesday, Sale talked manager Alex Cora into leaving him in the game with two outs and a runner on first.

Cora yielded, and Sale induced Guillermo Heredia to line out to shortstop Xander Bogaerts to end the inning. When the Red Sox scored in the top of the seventh, Sale wound up the pitcher of record, and he got the win as Boston held on for a 5-4 victory.

Reliever Marcus Walden was called on to close out the game, earning his second save in five chances, despite walking the first batter he faced to force in a run. Walden said Sale deserved the chance to get out of the sixth inning, which he did with his 116th pitch.

"I got up for the sixth," Walden said. "Sale wanted to go back out. You've got to give that man the ball."

In the other dugout, Tampa Bay manager Kevin Cash isn't encouraged by anything he sees from his club right now -- whether it's at the plate or on the mound.

Down 5-2 in the ninth inning, the Rays mounted a rally against reliever Brandon Workman, loading the bases and scoring a run to make it 5-3 and ending the night for Workman.

Walden came in and walked Tommy Pham to make it 5-4, but he induced a grounder to first from Austin Meadows for the final out.

Stranding the tying run at third base to end the game didn't thrill Cash, who said he wasn't encouraged at all by the two runs in the ninth.

"If you'd have asked me that two weeks ago, I'd have probably been more encouraged, but ... nah, I want to win the game. We need to win, so get the big hit, make the big pitch. We're just not doing it right now," Cash said.

"So no, there's not much encouragement right now."

Travis d'Arnaud continued his torrid pace at the plate with his 11th home run of the season, a two-run shot off Sale that hooked around the left field foul pole in the third inning.

D'Arnaud has driven in 12 of the Rays' 26 runs over their past nine games.

The right-hander has made six career starts against the American League East rival, going 4-1 with a 4.13 ERA.

Tampa Bay is 13-8 in contests Morton has started.