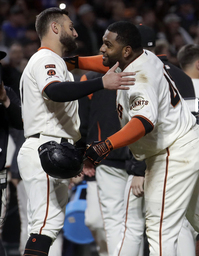 Two undefeated pitchers in July put their winning streaks on the line Wednesday afternoon when the San Francisco Giants attempt to close out a three-game sweep of the visiting Chicago Cubs.

The Giants have won the first two games of the series by identical 5-4 scores, needing 13 innings on Tuesday to record the 10th win in the past 11 games.

Five of those 10 wins came in extra innings, all in the past eight days.

The Cubs, who lost the last game of a homestand on Sunday following a four-game winning streak, have now dropped three straight.

Beede is coming off the best performance of his two-year career, when he shut out the New York Mets on three hits over eight innings in a 1-0 win on Friday.

The 26-year-old did not get a decision in that game after he went 2-0 in his previous two starts. He owns a 1.66 ERA in three July starts.

Beede has never faced the Cubs.

Like Beede, Lester has two wins and a no-decision in three July starts, over which he's compiled a 3.79 ERA. The no-decision came in his most recent effort, a 6-5 home win over San Diego on Friday, when he gave up four runs on 12 hits in six innings.

With the Cubs staring at a pair of three-game series at the sites of National League Central challengers -- Milwaukee and St. Louis -- after completing the San Francisco set on Wednesday, and the Giants dealing with five extra-inning games in eight days, both clubs spent Tuesday afternoon making pitching plans.

The Cubs copied a move the Giants had made one day earlier, demoting Monday's starting pitcher, Alec Mills, in order to add left-hander Tim Collins to their bullpen.

The Giants did the same with Sunday starter Conner Menez on Monday, sending him to Triple-A Sacramento so that right-hander Sam Coonrod could be available for the Chicago series.

That moved proved to be a stroke of genius, as the Giants had to call upon Coonrod as a fifth reliever in Tuesday's game. He retired the Cubs in order in the top of the 13th, then was rewarded with his first major league win when Pablo Sandoval connected for a walk-off home run in the bottom of the inning.

As Giants manager Bruce Bochy had the day before, Cubs manager Joe Maddon found himself basically apologizing to Mills after the transaction.

"He knows he did his job," Maddon said to reporters. "I really like the way he pitches and I told him so."

Bochy, meanwhile, admitted his attention will be divided Wednesday between San Francisco and Arizona, where Giants right-hander Johnny Cueto will face live hitters for the first time in a workout since undergoing Tommy John surgery.

"I love the progress he's made," Bochy told reporters. "I'm not going to be surprised to see him pitch (for the Giants) in September."