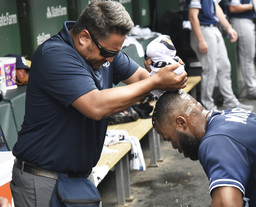 The heat figures to be on again Saturday at a sweltering Wrigley Field as the Padres and Cubs meet for the second game of a three-game series.

But the temperature could be much hotter on the Padres, who have lost six of seven games coming out of the All-Star break while displaying some of their worst fundamentals of the season.

Was it the oppressive heat at Wrigley Field on Friday that forced the Padres into two costly errors in a decisive eighth inning? Or was it simply an extension of bad play?

"It was extraordinarily hot for both sides," Cubs manager Joe Maddon said after Friday's game. "It was a sloppy game."

The Padres have been playing sloppy games for a while now. They have committed nine errors in the past five games in addition to a number of mental mistakes. The team that closed out the first half by winning three straight games at Dodger Stadium has dropped into the basement of the National League West division.

"We have not been fundamentally sound," Padres manager Andy Green said.

The Padres hope to snap out of their funk Saturday against a surging Cubs team (6-1 since the break) with San Diego left-hander Joey Lucchesi (7-4, 3.92 ERA) starting against Chicago left-hander Jose Quintana (7-7, 4.21 ERA).

Lucchesi will be making his 19th start. He has given up 46 runs (44 earned) on 84 hits and 28 walks in 101 innings with 96 strikeouts. He made one start against the Cubs as a rookie in 2018 and got a no-decision, giving up three runs (two earned) on seven hits and no walks with nine strikeouts in 5 2/3 innings.

The Padres are 9-9 in Lucchesi's starts this season.

The 30-year-old has a 1-0 record against the Padres with a 2.77 ERA in two starts. He has given up four runs on nine hits and four walks with 11 strikeouts in 13 innings.

One of the highlights in the series is the showcase of shortstops Javier Baez of the Cubs and Fernando Tatis Jr. of the Padres.

Tatis was spectacular during the first half of the season. Recently, however, he has struggled. He has committed six errors in the seven games since the All-Star break and is 2-for-18 with 11 strikeouts in the first four games of the road trip.

"Tatis and Baez are two of the more fun guys to watch in baseball," Green said before Friday's game, which included Baez's 23rd homer. "They both tag guys in a way that no one else does. They can contort their bodies and avoid tags in a way no one else can do. They play with literally no fear of a mistake on the baseball field. They are willing to take chances."