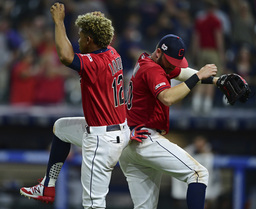 The Cleveland Indians have manhandled the Detroit Tigers to the tune of winning 10 meetings in a row and 11 of 12 this season.

The Indians aim to maintain their mastery of the Tigers and complete a four-game sweep of their American League Central rivals on Thursday when the clubs reconvene in Cleveland.

The Indians have won 10 of their last 12 overall to move a season-best 14 games over .500. They now find themselves within four games of first-place Minnesota.

Jose Ramirez, who had three hits in Cleveland's 7-2 victory over Detroit on Wednesday, has recorded a double in four straight contests and has eight multi-hit performances in his last 18 starts.

"Yeah, I've been feeling more confident and the (hard work) continues and the results are showing up. But, I feel really confident," Ramirez said, via the team translator.

"No matter who you are, when you're struggling, you feel it," Indians manager Terry Francona said of Ramirez. "Because it had been an extended period, you see him smile a little bit more. He's feeling a little better about himself."

Rookie Oscar Mercado likely is feeling pretty good after answering a 1-for-25 slump by registering two RBIs in each game of this series. The 24-year-old Mercado is batting a robust .394 with three homers and 12 RBIs in nine career games versus Detroit.

Cleveland right-hander Trevor Bauer (8-7, 3.65 ERA), who will get the nod on Thursday, sustained his first loss since June 6 after allowing three solo homers in six innings of Saturday's 6-2 setback versus Minnesota.

Bauer sports a 9-6 record with a 5.40 ERA in 19 career appearances (18 starts) against the Tigers after going 1-1 in three outings this season.

The 28-year-old allowed four runs on 10 hits in a 4-1 setback to Detroit on April 10 before scattering four hits while recording his lone career shutout in an 8-0 romp on June 16.

Nicholas Castellanos belted a solo homer on Wednesday and is riding a four-game hitting streak heading into the tilt with Bauer, against whom he is 13-for-47 with a homer and 10 RBIs.

"He's swinging good," Tigers manager Ron Gardenhire said of the 27-year-old Castellanos, who has 11 hits against Cleveland this season.

"He made a nice adjustment a few weeks ago with his swing, changed a little bit, and I think he's been barreling up a lot more baseballs. He hits it really hard."

Unfortunately for Detroit, the sputtering team struck out 17 times overall on Wednesday to fall for the eighth time in nine outings and 23 of its last 27.

Tigers left-hander Matthew Boyd (6-7, 3.95 ERA) will get the nod, looking to avenge his last outing versus Cleveland, against which he surrendered three homers and five runs total in six innings of a no-decision on June 21.

Boyd, who owns a 2-3 mark with a 3.40 ERA in 10 career appearances (nine starts) versus the Indians, has yielded 28 runs and 12 homers in his last seven starts overall.