Twins go for road sweep of Indians against Bieber 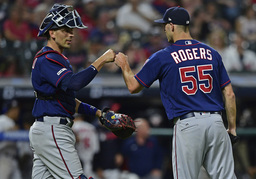 The Minnesota Twins lead the majors in homers this season, and they haven't been shy about flexing their muscles in the first two contests of their three-game series against the Cleveland Indians.

After going deep a combined five times in back-to-back wins, the visiting Twins look to extend their lead in the American League Central on Sunday afternoon when they vie for a series sweep in Cleveland.

"Every pitcher is the same," the 26-year-old Kepler said after homering five times in as many at-bats over two games against Trevor Bauer this season.

"I have the same approach. I just try to simplify it when I go up there."

The Twins have won five of eight in the season series to build a 7 1/2-game lead over second-place Cleveland, which will turn to All-Star Game Most Valuable Player Shane Bieber (8-3, 3.45 ERA) in hopes of averting a sweep Sunday.

"There have been a lot of questions about this particular series, but I don't think our guys have approached it any differently," Minnesota manager Rocco Baldelli told reporters. "But our guys have gone out there and produced and gotten it done in big moments, and it's been impressive to watch the past two days."

Sano is 3-for-8 in his career versus Bieber, who improved to 2-0 with a 4.05 ERA in five career appearances against the Twins after yielding two runs on five hits in seven innings of a 5-2 win on June 4.

The 24-year-old Bieber made his major league debut versus Minnesota last season.

Twins right-hander Jose Berrios (8-5, 3.00) will get the nod and look to snap a five-start winless run.

Berrios fell to 0-3 with a 2.65 ERA in that stretch after allowing three runs on six hits in five innings of a 7-2 setback at Oakland on July 4.

The 25-year-old, however, improved to 5-2 with a 3.71 ERA and 0.94 WHIP in nine career starts against the Indians after winning both of his encounters this season.

Berrios scattered two hits and struck out a season high-tying 10 in 7 2/3 innings of a 2-0 victory on March 28 before permitting two runs on as many hits in six frames of a 5-4 win on June 6.

Cleveland's Jose Ramirez belted a solo homer on Saturday to extend his hitting streak to five games, during which he has gone deep three times to go along with five RBIs and six runs scored. Ramirez is just 4-for-23 against Berrios, however.

The Indians were limited to just one more run -- rookie Bobby Bradley's first career homer -- en route to dropping their second straight game. Cleveland entered the All-Star break on a season-high six-game winning streak and a winner of 11 of 14 overall.

"We got a lot of games left. Things like this are going to happen," All-Star shortstop Francisco Lindor told the media. "We're gonna have ups and downs, it's just a matter of making sure that the downs are really short."

Roberto Perez is on the upswing with a five-game hitting streak, during which he is 9-for-19.