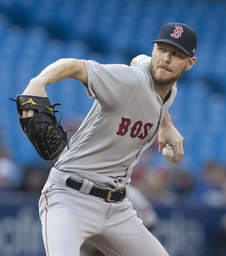 Absent from the American League All-Star team for the first time since 2011, Boston Red Sox ace Chris Sale had time to ruminate during the break on a first half he described as "absolutely embarrassing."

"On a team like this, they need me to be better, and I haven't been there for them," said Sale following a loss his last time out that dropped him to 3-8 on the season. "I'm standing before you as frustrated as I've ever been."

The left-hander's quest at redemption begins Saturday as he takes on the visiting Los Angeles Dodgers in his first start of the second half.

Sale's ERA climbed to 4.04 after he was tagged for five runs on a season-high nine hits in 5 2/3 innings against the Toronto Blue Jays on July 3. It marked the second straight start that he gave up five runs; Sale reached that total of runs allowed just once all of last season.

"Hopefully, when he comes back, we'll get him back on track," Red Sox manager Alex Cora said.

Sale will be opposed by right-hander Ross Stripling (3-3, 3.79 ERA), who will look to get the Dodgers back on track after four straight losses.

Los Angeles dropped the opener of the three-game series Friday, 8-1. The first rematch between the 2018 World Series opponents was close until Xander Bogaerts blew the game open with a three-run home run as part of a five-run seventh inning for the Red Sox.

"We have to come out aggressive, because we know these guys are one of the best teams in the game," Bogaerts said. "Obviously they're going to come here and try to beat us pretty bad for last year. I think it was a good way to start."

The Dodgers saw Corey Seager, David Freese and A.J. Pollock all return to the lineup from stints on the injured list, but it wasn't enough. The trio combined to go 1-for-11 in the contest.

The Red Sox, conversely, won their fifth straight game. Third baseman Rafael Devers picked up where he left off in the first half, homering in the contest for his 17th blast of the season and fifth in seven games this month.

Christian Vazquez added a solo shot, his fifth in his last eight games, as Boston has scored at least six runs in each game during its streak and 14 of its last 16.

Since taking the place of Rich Hill in the Dodgers' rotation, Stripling hasn't reached five innings in his last three starts. He's given up four runs in each of his last two outings, including a loss to the San Diego Padres on July 7.

Stripling has faced the Red Sox once before, throwing five scoreless innings against them in 2016.

Sale last faced the Dodgers in Game 5 of the World Series, where he closed out Boston's championship win by striking out the side in the bottom of the ninth inning. Against Los Angeles in the regular season, he is winless in two appearances (one start) to go with a 10.50 ERA.