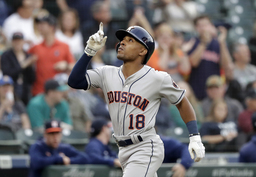 Even without stars such as Jose Altuve, Carlos Correa and George Springer, the Houston Astros continue to win.

The Astros earned their fifth straight victory Tuesday night in Seattle, rallying in the final three innings to take an 11-5 decision over the Mariners.

"We have good players and we know how to win, but we've had to win a little differently," Astros manager AJ Hinch said. "We've manufactured runs a little bit better."

Seattle has dropped four in a row and seven of eight.

Correa is expected to miss up to six weeks after sustaining a cracked rib while getting a massage at his home last week. Springer, Altuve and infielder Aledmys Diaz are out with hamstring strains, although all have showed progress in recent days.

"It's going to be a challenging time for our club," Astros general manager Jeff Luhnow told MLB.com. "We have six or seven players right now who aren't able to play, and that's frustrating for the month of June.

So far, there's been no need for the latter.

Alex Bregman went 2-for-4 with a double and three RBIs on Tuesday, and seven other Astros drove in at least one run.

The Mariners took a 5-4 lead in the sixth inning on pinch hitter Daniel Vogelbach's three-run double, but the Astros responded with three runs in the seventh and four more in the eighth.

"We just kept coming at them with good at-bats and ended up with a couple of big innings," Hinch said. "(There is) a lot to be said about getting a leadoff runner on, especially after you give up a big inning the way we did."

Even without them, the Astros improved to 5-0 against the Mariners this season.

It was the 14th time this season that Seattle surrendered 10 or more runs, the most in the majors. The Mariners have lost by six or more runs five times in the past 10 games.

"We have a lot of areas that have been a struggle at times," Mariners manager Scott Servais said. "It's one of those things. We are in a funk right now."

Peacock is 6-4 with a 4.21 ERA in 19 career games against the Mariners, including 10 starts. He got a victory April 12 in Seattle with 3 1/3 innings of one-hit relief, striking out seven.