Gray tries to keep Rockies rolling at home vs. Jays 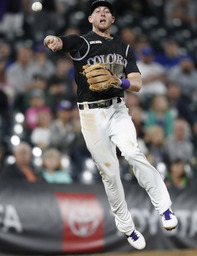 The Colorado Rockies have lived on a tightrope for most of their current homestand, but it is working well for them. They are 7-1 with two games remaining, and four of those wins have come on their last at-bat.

Coming off a 13-6 win over the Toronto Blue Jays in the opener of a three-game series on Friday, Colorado has a chance to wrap up a fourth consecutive series victory.

Gray has used sports psychology to help him recover from a tough finish to 2018. As a result of that, he has ways to get his focus back after a bad pitch, such as finding the American flag in the ballpark as a focal point.

It has worked to help him stay steady on the mound when things are going south.

"It could be a pitch I thought was a strike that I get balled on, or something frustrating like an infield swinging bunt and maybe a couple more pitches that didn't go my way," Gray told MLB.com. "Before things go terrible, it's time to step off, look at the flagpole, remember what you're doing, think of what's the best thing to do in the situation and stay on top of that.

"I acknowledge what happened. ... But this is where I'm at right now, and this is what I need to do. So it's almost like finding an opportunity in it."

Gray will make his second career start against Toronto. His first one came on June 27, 2016, at Coors Field, where he beat the eventual American League wild-card squad with a seven-inning outing. He allowed five runs (four earned) and fanned eight.

He will face a veteran whose record doesn't reflect how well he has pitched. Stroman is 3-6 but has a 2.74 ERA in 12 starts. He is coming off three solid outings, giving up just one earned run in each of those games.

In his latest start, Stroman was ill but still limited the San Diego Padres to one run in five innings during a 10-1 victory Sunday.

"I didn't feel too good," Stroman said, according to MLB.com. "Just a little nauseous, a little dizzy. We've kind of been battling a little bug around the clubhouse a little bit, guys have been feeling under the weather. But at the end of the day, I kind of just pitch off adrenaline, and when I'm out there, kind of push everything else to the side."

Stroman, who bounced back after three rough starts to open May, could soon be in his last days with Toronto. He has been the subject of several trade rumors with the Blue Jays off to a 21-36 start. The Athletic quoted an MLB executive who said Toronto's rebuild could mean trading guys such as Stroman and Aaron Sanchez.

Stroman has not faced the Rockies in his career.