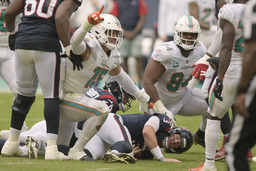 HOUSTON (AP) The Houston Texans will return to Davis Mills at quarterback against the Dallas Cowboys on Sunday, two weeks after he was benched for Kyle Allen.

The switch comes after Allen was picked off on Houston's first play of the game against Cleveland last weekend, had a fumble returned for a touchdown and an interception brought back for another score as Houston (1-10-1) dropped its seventh straight game.

Mills led the NFL with 11 interceptions before he was benched after 10 games.

The Texans have the NFL's worst passing offense, averaging 279.3 yards a game. Allen had two interceptions in his first start to give him five turnovers in the last two weeks and leave the Texans at minus-6 in turnover margin, which ranks 29th in the league.

Smith said he thinks that a couple of weeks watching from the sideline will be beneficial to Mills in his return.

"It's just looking at it from a different perspective," Smith said. "Normally observing can help, instead of you being the guy that's under the gun."

Mills wasn't made available to reporters Wednesday, but Smith said the QB is excited for another shot to start and doesn't think the benching affected his confidence.

"Not really," he said. "We were real about why we made the move and reasons why."

Mills was a third-round pick out of Stanford in the 2021 draft. He has thrown for 2,144 yards with 11 touchdowns and 11 interceptions this season.

He opened last season as a backup to Tyrod Taylor, with Deshaun Watson sitting out after a trade requests and lawsuits by two dozen women alleging sexual misconduct during massage sessions. But Taylor got hurt in Week 2, thrusting Mills into the starting job.

He came in for Taylor in Week 2 and started the next six games while Taylor recovered from an injury. Taylor started the next four games but struggled and was benched in the fourth game to make way for Mills to finish the season as the starter.

He led the Texans to wins in two of their last five games last year. But he failed to make progress this year and showed time and time again that he couldn't help the Texans close out games late.