Rams' Stafford likely out for year with spinal cord bruise 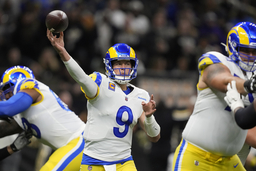 INGLEWOOD, Calif. (AP) Los Angeles Rams quarterback Matthew Stafford is likely to miss the rest of the season with a bruised spinal cord.

Stafford sat out for the third time in four weeks while the Rams lost their sixth consecutive game on a last-minute TD reception by DK Metcalf. Stafford was placed on injured reserve Saturday after clearing the NFL's concussion protocol for the second time this season, which meant he only could have returned for the final two games of the regular season.

Stafford has no practical reason to return this season anyway for the Rams, who will finish with their first losing record in McVay's six-year tenure. The 34-year-old star quarterback is under contract until 2026.

Stafford has passed for 2,087 yards with 10 touchdowns and eight interceptions while completing a career-high 68% of his passes in nine games this season, his second with the Rams after 12 years with the Detroit Lions. Stafford had been one of the NFL's most durable quarterbacks over the previous 11 seasons, missing just eight games - all in the 2019 season - due to injury.

Stafford felt numbness in his legs during the Rams' loss at New Orleans two weeks ago while playing just two days after clearing the concussion protocol for the first time.

The quarterback had to go back in the concussion protocol under league rules, but Stafford's injury apparently was related to his spine. The Rams have yet to confirm Stafford incurred a concussion at all this season.

Stafford and All-Pros Aaron Donald and Cooper Kupp are all out with injuries for the Rams, whose losing streak is their longest since 2016.

John Wolford made his fourth career start in place of Stafford against the Seahawks, passing for 178 yards with no touchdowns and two interceptions.