Chargers will miss 3 starters on offense versus Raiders 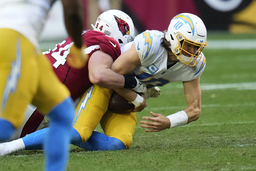 COSTA MESA, Calif. (AP) The Los Angeles Chargers will be without three starters on offense for Sunday's AFC West matchup against the Las Vegas Raiders.

Center Corey Linsley, right tackle Trey Pipkins and wide receiver Mike Williams were ruled out on Friday after not practicing this week.

Linsley remains in concussion protocol, and Pipkins continues to deal with an MCL injury to his right knee. Will Clapp is expected to get his third start of the season at center, and Foster Sarell would be the starting right tackle for the second time in four games.

Justin Herbert has taken nine sacks in the last two games, but said some are due to him.

Linebacker Drue Tranquill and defensive lineman Breiden Fehoko did not practice on Friday and are listed as questionable due to illness, but coach Brandon Staley said he expects both to play.

Williams will be sidelined for the fourth time in five games due to a right ankle sprain. Staley said Williams is making progress, but not enough to return this week.

The Chargers go into Sunday's game with a 6-5 record, and are one game out of a playoff spot.