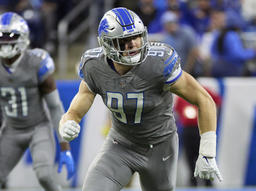 The top two picks in the 2022 NFL draft will be on the same field for the first time as pros when Detroit hosts Jacksonville on Sunday, a matchup of 4-7 teams that won a combined five games in November and are clinging to slim playoff hopes.

It's the second game in less than a year that features Walker and Hutchinson on opposite sidelines. They played in the College Football Playoff last December, with Walker's Georgia team defeating Michigan 34-11 in the Orange Bowl.

"I'd definitely like to exchange jerseys with Aidan," Jacksonville's Walker said this week. "A lot of people try to make it about competition when it comes to us two, but I guess that's the competitive nature within the game and how we got drafted. But I'd love to swap jerseys with him."

Although both defenses have been far from stout - the Lions rank last in yards and points allowed while the Jaguars have a meager 16 sacks - their newest and brightest stars give them centerpieces to build around.

Jacksonville shocked many outsiders as it became clear general manager Trent Baalke and coach Doug Pederson planned to select Walker over Hutchinson with the No. 1 choice. They considered Walker a more versatile pass rusher than Hutchinson.

Despite notching just 9 + sacks in three years of college, they envisioned the former Georgia standout as an outside linebacker who could drop into coverage or line up anywhere along the defensive line and affect opposing quarterbacks.

The Lions, meanwhile, gladly welcomed the hometown Hutchinson at No. 2. The former Michigan star had 18 + sacks in college, including 14 as a senior, a stellar season that helped him finish second in Heisman Trophy voting.

Hutchinson acknowledged this week that the draft decision "will stick with me forever."

No doubt, the Jaguars fell in love with Walker because of his size and athleticism, factors they believe give him a higher ceiling than Hutchinson.

A more telling gauge will come over time. But for now, after the first 11 games of their NFL careers, Hutchinson has been the more productive pass rusher.

Hutchinson has more sacks (5 + to 2 +), more quarterback hits (10 to 9), more interceptions (2 to 1) and more fumble returns (1 to 0). Walker has the edge in tackles, leading 36 to 31, but also had two costly roughing-the-passer penalties that may have cost Jacksonville early season victories against Houston and Indianapolis.

Now they meet again - with much different stakes and both guys still making strides.