Commanders run game lets Heinicke be himself and win games 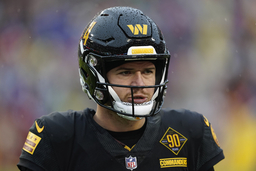 When the subject of Taylor Heinicke 's quarterback play came up after the latest Washington Commanders win, coach Ron Rivera summed it up pretty succinctly.

"Taylor," Rivera said with a chuckle. "I mean, it's what we're expecting: make some plays, do a couple things that, you know - ugh. But then come around and make that play that's going to ignite things."

Heinicke was his normal self in making some great passes and throwing an inexplicable interception in a 19-13 victory against Atlanta on Sunday. It's a winning recipe for Washington because of the one-two running back punch of Brian Robinson Jr. and Antonio Gibson that keeps defenses off balance on the ground and has the team 7-5 and sitting in playoff position with five games to go.

"We haven't really scratched the surface," said Robinson, who ran for a career-high 105 yards in his eighth game in his rookie NFL season, three months since getting shot in an attempted armed robbery. "We're really just getting started. I know it's a little late in the season, but we're finally starting to get rolling on the run game. It's just something to easily build onto, something to easily get better with and just keep rolling week in and week out."

The Commanders roll into an NFC East showdown at the 7-4 New York Giants with a lot of things clicking, from the running game that racked up 176 yards with five different ball carriers in the Falcons game to the defense that made the last-minute interception to preserve the victory.

Heinicke factors into that even if he's not the No. 1 reason they're 5-1 since he took over for Carson Wentz as the starter. He has thrown for seven touchdowns and five interceptions, and the biggest key to Washington keeping this run going is for Heinicke to avoid repeating errant throws or decisions that can prove costly.

"The biggest thing for quarterbacks is you've got to have a short memory span, so when we do make a mistake, let's not compound it with another one," Heinicke said.

The defense made a steady improvement after a rough start thanks in large part to the defensive line led by tackles Jonathan Allen and Daron Payne and edge rusher Montez Sweat. Now the secondary is starting to get in on the fun, with cornerback Kendall Fuller picking off passes in consecutive games - returning the first for a touchdown at Houston and then intercepting Atlanta's Marcus Mariota in the end zone with 58 seconds left.

"It all goes hand in hand," Fuller said. "When those guys (on the defensive line) are hunting, we're able to make plays on the ball. And when we're able to play good coverage, they're able to get sacks."

On one hand, the Commanders have gotten good at winning close games. On the other, Rivera would prefer for every game not to be a nail-biter and believes consistency is the next step.

Despite having a winning record for the first time during Rivera's tenure (and overall since 2018), Washington has a minus-3 point differential this season.

Allen and Payne have gotten the lion's share of the credit for Washington's defense wreaking havoc on opposing offensive lines and quarterbacks. After getting to Mariota on Sunday, Sweat now leads the team with seven sacks and has more than made up for the absence of Chase Young so far.

Sweat credits the steady improvement to "being relentless" and making the most of being in his fourth pro season.

"A veteran usually plays better than a rookie, so that's just all with experience and just having more snaps," he said. "We pride ourselves upon that: swarming the ball. It's never over till it's over, so however they come I'm going to get them."

It's becoming apparent it will take an injury to Heinicke, and perhaps more, for Wentz to earn the starting QB job back. Heinicke did not run at all against the Falcons with Sam Howell backing him up, and it's not clear if Wentz will be in uniform at the Giants after practicing last week.

Cornerback Benjamin St-Juste's ankle injury from late in the Texans game Nov. 28 caused him to be inactive against Atlanta and forced rookie Christian Holmes, a seventh-round pick, to make his first start of the season.

Getting St-Juste and linebacker Cole Holcomb, who was expected to see a specialist for his foot injury, back is perhaps more important for Washington than inserting Young for his season debut more than a year since tearing the ACL in his right knee.

17 - Years until now since Washington had two separate three-game winning streaks during the same season.

As left tackle Charles Leno put it, the Commanders are "going to have to bring our lunch pail and our hard hats" to the Meadowlands to face the Giants for the first of two games against them sandwiched around their bye week. FanDuel Sportsbook lists Washington as a 1+-point favorite.