Browns CB Newsome II out against Buccaneers with concussion 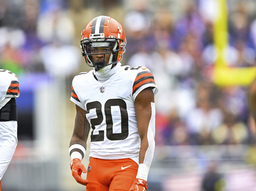 Newsome was injured last week when he collided with a teammate two days before the Browns (3-7) lost to Buffalo. He hasn't cleared NFL protocol and will sit out when Cleveland hosts Tom Brady and the Buccaneers.

The Browns did have some positive injury news as starting center Hjalte Froholdt practiced Friday after missing two games with an unspecified illness. Froholdt came off the bench last week when starter Ethan Pocic was injured on the Browns' first offensive series.