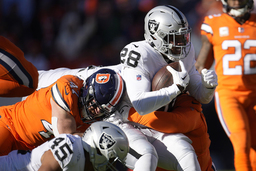 HENDERSON, Nev. (AP) The Las Vegas Raiders had their best stretch this season when running back Josh Jacobs put much of the offensive load on his shoulders.

He did it again Sunday at Denver, and there is little coincidence the Raiders ended their three-game losing streak by beating the Broncos 22-16 in overtime.

Because Jacobs was so effective in rushing for 109 yards and catching three passes for 51 more, that helped open up a Raiders passing game that was limited with tight end Darren Waller and wide receiver Hunter Renfrow on injured reserve.

Derek Carr passed for a season-high 307 yards, just the second time he has topped 300 yards this year.

This also was Jacobs' first 100-yard rushing game since a three-game stretch a month ago in which he rushed for 144, 154 and 143 yards. The Raiders beat the Broncos and Houston Texans and lost to the Kansas City Chiefs by just a point.

Then over the following three-game span, Jacobs had failed to crack 80 yards, and Las Vegas went 0-3 against teams all with losing records.

Jacobs will need to continue to deliver if the Raiders are going to do much the rest of the season.

"To me, one of the most impressive things about him is he never asks to come out of a game," Raiders coach Josh McDaniels said Monday. "I've coached for a while, and that's a tough position to play and to never come out because you get hit a lot and you get banged around and guys are falling on you and all the rest of it.

"He runs in there, he takes a bunch of hits, he doesn't even look to the sideline. It took me a few weeks to get used to that because you're normally thinking you're going to be subbing backs pretty regularly. I'm used to that from my recent past where we used a lot of different backs, but this guy just gives us such a high level of confidence in him and never appears to be winded or tired."

Jacobs went into training camp in the best shape of his career, and he has played this season with extra motivation after the Raiders didn't pick up his fifth-year option. So he's playing for the Raiders and 31 other teams.

The Raiders have played their best this season when Jacobs has been at his best, and that includes a much-needed victory at Denver.

"(We) made a few crucial plays there at the end to win it," McDaniels said. "Always good to win. Even better when it's in the division on the road."

Wide receiver Davante Adams. Given how short-handed the Raiders are at receiver, defenses focus even more attention on stopping Adams. It doesn't matter. Just get the ball in his vicinity, and Adams is likely to make magic happen. He did that against the Broncos, catching seven passes for 141 yards and two touchdowns that included the winner in OT on a beautiful fake to get wide open.

Penalties. The sheer numbers are bad enough. Las Vegas is 28th each in penalties per game (6.9) and average penalty yardage (56.7). It's also the timing. The Raiders have had a number of drives disrupted because of a false start here or a holding call there. That happened again Sunday when the Raiders penalties helped cause their first two drives to end in zero points.

Cornerback Sam Webb. The Broncos scored their only touchdown on a drive in which Webb committed pass interference and missed a key tackle. He was called for defensive holding - the penalty was declined - on another drive that ended in a field goal. Tough day for the undrafted rookie.

OT Kolton Miller didn't play at Denver because of shoulder and abdomen injuries. CB Nate Hobbs is eligible to come off IR with a broken hand.

3 - Crosby has blocked three kicks in his career, all against the Broncos. His other two came in a Week 17 game in the 2020 season.

The Raiders finish their stretch of road games at Seattle on Sunday. It will be Las Vegas' fourth road game in five weeks. Four of their final six games are at home.