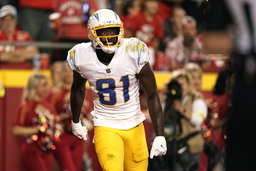 The sixth-year receiver reinjured his right ankle during the first quarter of Sunday night's game against the Kansas City Chiefs.

Williams was hurt after he made a 15-yard catch along the right sideline. The original injury, which caused him to miss two games, happened during the fourth quarter against Seattle on Oct. 23.

Williams came into the game leading the Chargers in receiving yards (495).