Allen, Williams in the lineup for Chargers against Chiefs 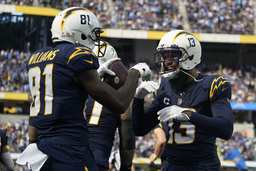 INGLEWOOD, Calif. (AP) Justin Herbert has his top receivers back for the Los Angeles Chargers' AFC West showdown against the Kansas City Chiefs.

Keenan Allen and Mike Williams are active for the Sunday night game. Both have missed the past two games.

This is only Allen's third game of the season as he has missed seven because of a nagging left hamstring injury that occurred during the Sept. 11 opener against the Las Vegas Raiders.

Williams has been sidelined the past two games after suffering a high sprain to his right ankle during the fourth quarter against Seattle on Oct. 23.

While Herbert gets his top wide receivers back, Patrick Mahomes and the Chiefs are down a couple of playmakers. JuJu Smith-Schuster is out because of a concussion and Mecole Hardman is on injured reserve with an abdominal injury.

Marquez Valdes-Scantling was dealing with an illness most of the week, but is active.