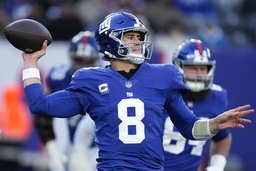 EAST RUTHERFORD, N.J. (AP) For the first time this season, there are concerns about the New York Giants.

The team that first-year coach Brian Daboll led to seven wins in its first nine games looked very much like the dreadful 2021 Giants in dropping a 31-18 decision to the Detroit Lions on Sunday.

Daniel Jones threw two interceptions and the Giants turned the ball over three times, giving away 14 points. They were called for eight penalties for 63 yards and the normally tough red-zone defense allowed the Lions to score all four times they got inside the 20. Detroit also went 6 of 13 on third down.

"In all the games before, we had some stuff going for us," safety Julian Love said. "Today, I felt we were getting killed on penalties, turnovers, maybe explosive plays. I'm not sure what their third-down numbers were. All those situational things that we've been doing so well at on both sides of the ball, we didn't have that today.

"It's easy to see what happened."

While the Giants are still in good shape with a 7-3 record and seven games to go in the regular season, there are issues.

They are coming into the tough part of their schedule, starting Thursday in Dallas. They also have two games with the NFC East-leading Eagles (9-1) and two with Washington (6-5), which has won five of six. New York also has to play Minnesota and Indianapolis.

The Giants also have a new problem: They are banged up. The secondary was decimated with starting cornerbacks Adoree Jackson (knee) and Fabian Moreau (ribs) and safety Jason Pinnock (jaw) sidelined. New York also had tackle Tyre Phillips and center Jon Feliciano left with neck injuries. Rookie receiver Wan'Dale Robinson injured a knee late in the game after catching a career-high nine passes for 100 yards.

"It happens in each game," Daboll said of the injuries. "I'll get with the trainers after this and talk about it and come up with a plan on a short week. It's what it is. There's no excuses."

The questionable one was for Jackson, who was hurt returning a punt.

"It was one of those things," Jackson said. "I tried to make a juke, thought it was good, he came down low. Leg was just in the ground. He got me that way. Nothing crazy like that. We were just out there playing ball."

Jackson said the next guy has to step up.

The other concern for the Giants is the Lions, who entered ranked No. 31 in run defense, held New York to 89 yards on the ground. NFL rushing leader Saquon Barkley gained 22 yards on 15 carries.

The Giants were never in the game as Detroit opened the second half with a 56-yard touchdown drive that Jamaal Williams capped with his second of three touchdown runs for a 24-6 lead.

Jones finished 27 of 44 for 341 yards and a meaningless TD pass to Richie James. He and Matt Breida also ran for a 3-yard TD runs.

"I think that's the disappointing part of it, and we've got to evaluate that, study it and make sure we can't let those things happen again," he said. "Another opportunity here in a few days to correct those things."