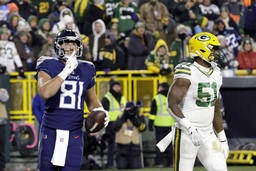 NASHVILLE, Tenn. (AP) Keep ignoring the Tennessee Titans. Coach Mike Vrabel and his team seem to thrive on adversity, and now they've found the one piece of the puzzle that's eluded them much of this NFL season.

The Titans (7-3) improved to 10-2 in games played on short rest since Vrabel took over as head coach in 2018, this time beating the Green Bay Packers 27-17 on Thursday night in a game Tennessee never trailed. They did it with the best passing performance this season to go along with Derrick Henry and a physical defense.

"We played the game the way we wanted to play," Titans quarterback Ryan Tannehill said.

The Titans played without starting center Ben Jones and put a 15th player on injured reserve hours before kickoff. Yet they still dictated the tempo from the opening possession, blocked an extra point attempt to preserve a 7-6 lead after the first quarter and never let the desperate Packers get closer than a field goal.

The two-time AFC South champs have won seven of eight with the one loss in overtime at Kansas City with rookie Malik Willis filling in for Tannehill. Of those three losses, two came by a combined four points.

The offense turned in its best performance this season with Tannehill throwing for a season-high 333 yards and two touchdowns. In his second game back from a sprained right ankle, Tannehill completed passes to eight different receivers. The Titans had five plays of 31 yards or longer.

Treylon Burkscaught seven of eight passes for 111 yards for his best performance as a rookie in his second game back from injured reserve. Henry even threw the third TD pass of his career, including the playoffs.

"I call myself a young Peyton Manning," Henry said, with a smile.

Kicker. Randy Bullock hurt his right calf in warmups just before the Titans' win over Denver. That forced the Titans to sign veteran Josh Lambo to the practice squad Tuesday before promoting him to the active roster Wednesday. Lambo connected on three of four extra points with one hitting the right upright. He only put one of four kickoffs into the end zone.

Henry. The two-time NFL rushing champ is the first NFL running back to reach the 1,000-yard rushing mark this season. He joined Walter Payton (1983 against the Saints) as only the second player in the Super Bowl era to post a game with at least 20 rushing attempts, two pass completions and both a rushing and passing TD.

Offensive coordinator Todd Downing. He has been an easy target for fans unhappy at an offense ranked last in the NFL, averaging just 281.7 yards per game. Hours after the big win, Downing was arrested early Friday morning for speeding and driving under the influence before being released on a $2,500 bond.

"It's something that we are going to take very seriously," Vrabel said. "We are going to gather all the information that we can, figure out what the next step is and do our best to move forward."

Sack leader Denico Autry, who blocked an extra point in Green Bay, had tests Friday on an injured knee that knocked him out of the game. Vrabel said he had seen Autry already on Friday. The lineman will miss some time, but Vrabel said, "Denico usually finds a way to get back sooner rather than later."

7 - The Titans are the only NFL franchise to win at least seven of their first 10 games in each of the past three seasons. They started 7-3 in 2020 in reaching the AFC championship game and 8-2 last season en route to earning the AFC's No. 1 seed.

A long weekend off. A team that had a bye Oct. 16 during the NFL's first bye weeks needs to heal up before a rematch of their divisional loss in January with Cincinnati visiting on Nov. 27.