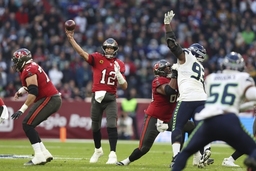 TAMPA, Fla. (AP) The Tampa Bay Buccaneers are back at .500 and feeling good about their prospects of making a strong second-half run.

The Bucs (5-5) enter this week's bye sitting alone atop the NFC South, confident they're headed in the right direction after consecutive wins over the Los Angeles Rams and Seattle Seahawks.

The two-game winning streak follows a stretch in which they struggled offensively and defensively while losing five of six games.

"You almost don't want to have a bye since you won two in a row," Bowles added. "But we've got some guys nicked up and we've got to get healthy, so we'll get some rest and get ready for the stretch run."

The Bucs delivered perhaps their best overall performance of the season to end Seattle's four-game winning streak with Tom Brady throwing for 258 yards and two touchdowns and finally getting some assistance from a running game that's been absent most of the year.

The defense sparkled, too, despite allowing a couple of late touchdowns that tightened the score in the fourth quarter.

"It wasn't perfect, but the best part is winning the game and feeling like we made some improvements," Brady said.

"We have a bye week now," the seven-time Super Bowl winner added, "so can take a little bit of time to refresh and get ready to make a big push, figure out kind of some of the things we haven't done well the first 10 weeks of the season, and how we can get better."

The remainder of the regular-season schedule includes road matchups at Cleveland, San Francisco, Arizona and Atlanta, as well as home games against New Orleans, Cincinnati and Carolina.

At 45, Brady still ranks among the league leaders in passing yardage, averaging 280.5 yards per game. WR Mike Evans is on pace for another 1,000-yard season receiving, and on Sunday Chris Godwin caught his first TD pass since undergoing knee surgery and Julio Jones scored his second since returning from injuries that have kept him out of five games this season.

The running game remains a work in progress. The Bucs rushed for a season-best 161 yards against the Seahawks, topping the century mark for the first time since a Week 1 victory over Dallas. That increased their season average by 10 yards per game, but they still have the NFL's second-worst ground attack at just 70.7 yards per game.

Rookie RB Rachaad White, seldom used on offense the first half of the season, delivered the first 100-yard rushing performance of his career against Seattle, finishing with 105 yards on 22 attempts.

Scoring remains a problem. Despite winning two in a row to get back to .500, the Bucs only scored 37 points in doing so. There are just five teams - Denver, Indianapolis, Washington, Pittsburgh and the Los Angeles Rams - averaging fewer than the 18.3 points per game Tampa Bay has scored through 10 weeks.

Bowles is hoping the bye will give players a chance to rest and get healthier. WR Russell Gage (hamstring) and G Luke Goedeke (foot) did not play against the Seahawks. Bowles declined to speculate on the severity of a hip pointer injury RB Leonard Fournette suffered during Sunday's victory.

17. To beat the Seahawks, the Bucs felt they had to contain RB Kenneth Walker III. Mission accomplished. The Seattle rookie managed 17 yards rushing on 10 attempts.

Bye week before resuming play on the road at Cleveland on Nov. 27.