Watt's presence provides Steelers with a glimmer of hope 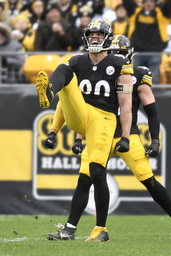 The way the NFL's Defensive Player of the Year in 2021 wreaked havoc. The intensity the game's best edge rusher brought to every snap, an intensity that compelled his teammates to match.

The mythology surrounding Watt, however, didn't fully prepare Kazee for what the newly acquired safety saw during the opening days of training camp in July.

"The first week of practice, I saw him have a (pass breakup) and then a pick-6 off a screen play," Kazee said. "I went back home and called my brother. I'm like, `The things that him and Minkah (Fitzpatrick) do, it just amazes me.'"

It's not just the plays Watt makes, but the ones he doesn't. During the second quarter of Pittsburgh's 20-10 victory over New Orleans on Sunday, the Saints put together a package that included Taysom Hill at quarterback with Alvin Kamara next to him in the backfield.

At the snap, Hill held the ball briefly before handing it to Kamara.

Kamara raced for 12 yards on the play, the longest run of the day for the Saints. That's the small picture. The big picture highlighted just how important Watt is to a team that believes it can put together a second-half surge following two months adrift while Watt was on the sideline recovering from a torn left pectoral.

Sure, Kamara found a little open room. What defensive end Cameron Heyward saw that the television cameras missed was Watt drilling Hill right after the exchange. Watt understood the assignment.

Given a chance to try and do too much, Watt didn't. The play offered to Heyward tangible proof that order had been restored for a defense that - no matter how many times coach Mike Tomlin would trot out his "next man up" cliche - sorely missed perhaps the most valuable non-quarterback in the NFL.

"You could see the execution there," Heyward said. "So the execution I just thought picked up in the run defense, and then that led to ... a couple of sacks and the turnovers as well."

The kind of "splash" plays that were rare during Watt's extended absence. Pittsburgh's path to contention in 2022 relies heavily on the offense not losing games so that the defense has the opportunity to win them.

With Watt on the sidelines in sweatpants, the plan fell apart. With his No. 90 back on the field creating his own unique brand of havoc, the carefully laid plan put together in the offseason sprung back to life in time - the Steelers hope - to salvage a so far forgettable year.

Kenny Pickett's legs. While Pickett will never be confused with Lamar Jackson, Josh Allen or Justin Fields, his mobility is something opponents never had to worry about during the latter stages of Ben Roethlisberger's career.

Pickett's 51 yards rushing were the most by a Steelers quarterback since Roethlisberger had 55 against the Raiders in 2010.

Pickett's decision-making. While he didn't turn the ball over in 30 pass attempts and hung in there despite absorbing six sacks, he is still learning how to read the field. With the Steelers driving in the third quarter, wide receiver George Pickens lined up in the slot to Pickett's right and broke open in the end zone. Rather than try to thread the needle, Pickett hesitated and ended up taking a sack on a drive that ended with a missed field goal.

Asking Pickett to read defenses like a 10-year veteran is unfair. Still, he will need to make progress in that department over the final eight games if Pittsburgh truly wants to be a factor - even if it's on the fringe - down the stretch.

Kazee spent the first half of the season on injured reserve because of a wrist injury. He was activated last week and found out he was starting less than 24 hours before kickoff after Fitzpatrick underwent emergency appendix surgery.

The six-year veteran hardly looked out of place filling in, snatching his 13th career interception in the fourth quarter to set up Pickett's 1-yard touchdown dive.

The Steelers signed kicker Matthew Wright off Kansas City's practice squad to fill in for injured Chris Boswell. Wright didn't exactly pick up where he left off with the Chiefs, missing two of his three field-goal attempts inside a relatively calm Acrisure Stadium.

Fitzpatrick's status coming off surgery is uncertain. Linebacker Myles Jack suited up, but did not play while battling a knee issue. Pickett shook off a balky left ankle to stay in the game.

3-0. Pittsburgh's record when it does not turn the ball over this season. The Steelers are 0-6 when they give it away at least once.

Try to win consecutive games for the first time this season when Cincinnati visits next Sunday. The Steelers opened 2022 with a stunning road upset over the defending AFC North champions in Week 1 thanks in large part to seven sacks and five takeaways.