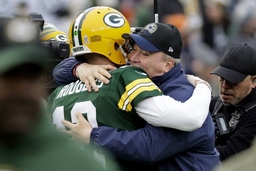 Instead, McCarthy made a crucial decision that backfired, going for it on fourth-and-3 on the opening possession of overtime when he could have sent Brett Maher out to try a long, go-ahead field goal.

The Cowboys were stopped, McCarthy's former quarterback Aaron Rodgers led the Packers down the field, and Green Bay beat Dallas 31-28 on Sunday.

"I'm fine with the decision," said McCarthy, who was fired as Green Bay's coach in 2018. "Obviously, I know we didn't convert. Fourth-and-3, we just didn't convert."

McCarthy was more upset about the penalties that led to that pivotal fourth down. He threw his headset to the turf in frustration after Dak Prescott was pressured by Jarran Reed and threw a desperation pass to Tony Pollard that fell incomplete.

Dallas' final offensive play capped a frustrating day for McCarthy in his return to the city that has a street near Lambeau Field named in his honor.

This wasn't how he envisioned his return.

The Cowboys (6-3) entered Sunday with a 195-0 record, including playoffs, when they led by at least 14 points heading into the fourth quarter.

"I'm very frustrated with the end of the game, obviously," McCarthy said. "I think just the biggest thing for us is we need to just go out here and just learn from these games. I love these kind of games. That's what I told these (guys), `You need these tight games to get to where you want to go.'

"I thought we were in total control and then in overtime the penalties and things were very, very, very frustrating. But you've got to overcome those things."

The Packers (4-6) rallied to tie the game on a pair of touchdown passes from Rodgers to rookie Christian Watson, who finished with four catches for 107 yards and three scores.

Penalties then prevented Dallas from putting it away in overtime.

An offensive offsides call on wide receiver Jalen Tolbert wiped out a 9-yard run by Pollard and forced Dallas into second-and-8. The Cowboys recovered to get a first down.

A holding call on guard Connor McGovern nullified a 16-yard run by Malik Davis. Rather than having a first down at the Green Bay 26, the Cowboys faced second-and-19 from their own 49.

Prescott threw a 16-yard completion to Dalton Schultz on the next play, but the Cowboys followed that with two incompletions, including the fourth-down play.

Cowboys receiver CeeDee Lamb believed Green Bay should have been called for pass interference on third down.

"They don't ever give us any explanation," said Lamb, who had 11 catches for 150 yards and two touchdowns. "They just call flags on us and not on the opposing team."

The Cowboys' collapse spoiled what had been a special day for McCarthy.

Before the game, he shared hugs with a number of Packers he'd coached, including Rodgers.

Although the relationship between McCarthy and Rodgers soured late in the coach's Green Bay tenure, they traded compliments this past week. Rodgers said the passage of time had given him a greater appreciation for the years he spent with McCarthy.

The four-time MVP quarterback said after the game that he and McCarthy also had a much longer conversation earlier in the day.

"That was really, really meaningful I think for both of us," Rodgers said.

McCarthy got emotional in the days leading up to the game as he spoke at length about what his years in Green Bay meant to him. But after the loss, McCarthy wasn't in much of a mood to talk about what his return meant personally.

"I'm not trying to be rude, (but) I'm humble pied out," McCarthy said.